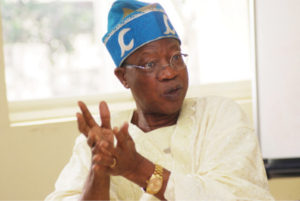 The Federal Government has restated its commitment to removing the bureaucratic and other impediments to registering new businesses as part of efforts to encourage entrepreneurs and facilitate investments in the country.

The Minister of Information and Culture, Alhaji Lai Mohammed, gave the assurance on Saturday at the 2016 Tony Elumelu Foundation (TEF) Entrepreneurship Forum in Lagos.

”To encourage entrepreneurs like you and also bring in more investments, the Administration is delivering in its commitment on the ease of doing business.

”In fact, the President has approved the establishment of the Presidential Council on Ease of Doing Business, in order to remove unnecessary red tapes and other impediments, thereby facilitating registration of businesses, clearing of goods from the ports, obtaining visa, paying taxes and obtaining land titles, among others,” the Minister told the Forum, where he was panellist alongside President Ernest Bai Koroma of Sierra Leone, former Nigerian President Olusegun Obasanjo, former Prime Minister of Benin Lionel Zinsou and Africa’s richest woman Folorunso Alakija.

Alhaji Mohammed also told the Forum, organised for the 1,000 budding entrepreneurs from across Africa under the TEF, that earlier this year, the Administration launched a 10 billion Naira Youth Entrepreneurship Support (YES) project to empower youths with loans to start businesses, as part of the job-creation initiatives of the Administration. It is expected that the YES project will create about 36,000 jobs annually.

”With insecurity and corruption also being tackled decisively, the enabling environment is being created for businesses to thrive in the country. We hope, when the time is ripe, young entrepreneurs like you will take advantage of these opportunities,” he said.

The Minister said the Administration is moving the country away from a mono-product economy to a diversified one, and in the process opening up great opportunities for businesses.

”With the crash in oil prices, which has negatively impacted on our economy, we are left with no choice but to explore new possibilities. The areas we are targeting include agriculture, solid minerals and the creative industries. We are also engaging in massive infrastructural development.

The Minister congratulated the 2016 Tony Elumelu Foundation Entrepreneurs, saying the fact that they all emerged after going through a rigorous selection process speaks to their determination and passion to succeed.

SA to Hon Minister of Information and Culture