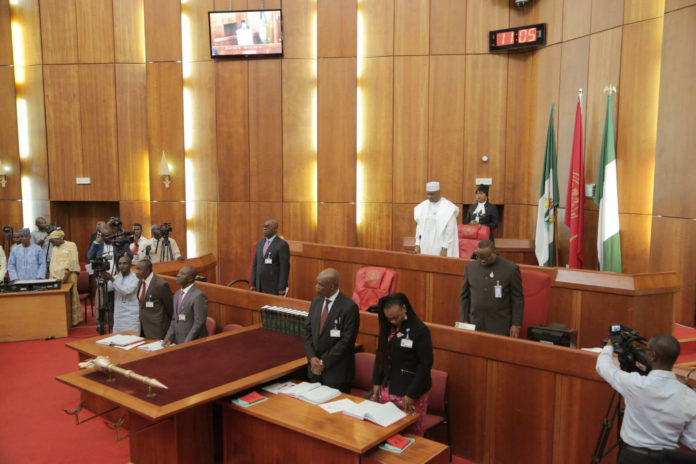 The Senate Committee on Environment has pledged it’s support for the National Biosafety Management Agency (NBMA) towards achieving its mandate.
This pledge was made Thursday by the Co-Chairman of the Committee, Senator Suleiman Hunkuyi during the Committee’s oversight visit to the Agency.
Sen. Hunkuyi urged the NBMA to continue to strive for perfection in the performance of their regulatory function by ensuring ultimate safety of human health and that of the environment in the activities of modern biotechnology.
He assured the management of the NBMA that the Committee would continue to support the Agency to overcome all the teething problems usually associated with young organizations in other to take the Agency to an enviable height.
Senator Hunkuyi noted that the Agency has done so excellently well in its short span of existence, adding that “going through your scorecard, it is safe to say that there has not been any error in the establishment of the National Biosafety Management Agency and in the appointment of Dr. Rufus Ebegba as the Direction-General of the Agency” who he said is “professionally endowed for the position”.
He further said that the Committee will continue to assist the Agency to get all that is constitutionally due it reiterating that this government has made history because of the provision of capital release which he said has been met up to 70/80 percent as at September, 2016 despite the challenging economy.
On the issue of the controversies surrounding the NBMA, the Committee Co-Chairman enjoined the Agency not to be discouraged in its stride to do the right thing stressing that people have their own different reasons for expressing concerns.
Senator Oluremi Tinubu who also is the Co-Chairman of the Committee led other members of the Committee on the visit.
Earlier, Director -General of the NBMA, Dr. Rufus Ebegba briefed the Committee on the mandate and activities of the Agency since its establishment.
He commended the Committee’s visit and used the occasion to call for synergy between the National Assembly and the National Biosafety Management Agency in order to further strengthen the collaboration and relationship which exists between the two institutions.
Ovuakporie Efe
Head (Press)