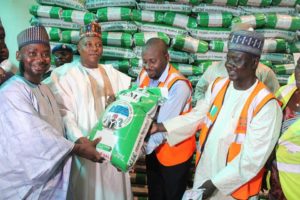 The North East region of Nigeria has suffered severe humanitarian crisis as a result of Boko Haram insurgency. This resulted in drastic decline in socio-economic activities including farming, pastoralism, commerce and social interactions among the populace especially in Borno, Yobe and Adamawa states.

Similarly, there has been unprecedented displacement of persons from the region to safer areas in Bauchi, Gombe, Taraba, and others including the Federal Capital Territory.

The Humanitarian Coordination Forum (HCF) consisting of relevant Federal government agencies, UN Agencies and International Non-Government Organizations (INGOs) was adopted both at the national and state level. The forum meets once a month under the coordination of NEMA to analyze and proffer solutions to humanitarian situations. A platform for coordinating efforts of all humanitarian actors and daily administration at the camps (Camp Coordination and Camp Management) was also created.

There are currently 18 formal internally displaced persons’ (IDP) camps in Borno state, 7 in Yobe and 4 in Adamawa states respectively while there are 16 satellite camps in the liberated areas of Borno state.

Furthermore, to address the humanitarian challenges in the North East, the Federal Government through NEMA established cells in Maiduguri and sub-cells in Yola, Adamawa state and Damaturu, Yobe state, in collaboration with the military. This was to create access for aid workers to provide the much needed assistance to the IDPs and open a safe corridor for local people that escaped Boko Haram occupations and repentant militants to move into safety.

NEMA set up Operations Office in Gombe and Adamawa States to cater for the influx of IDPs and those taking refuge in Adamawa, Bauchi, Gombe and Taraba states and also deployed its staff to Maiduguri and the Humanitarian Sub-cells in Damaturu and Yola to provide support and assistance to IDPs.

To complement the efforts of the affected state governments and also to cushion the humanitarian challenges especially on food security and nutrition, NEMA has been providing food items to the IDPs in the camps. To ensure the steady supply of these food and Non-Food items (NFIs), NEMA signed a Memorandum of Understanding (MoU) with Borno and Yobe states. It has equally entered into a mutual agreement with Adamawa state on provision of reliefs to IDPs. The Agency also provided drugs to some major hospitals in the zones and deployed medical team and equipment to the North East to support the provision of Medicare to the IDPs while providing working tools for IDPs with expertise in selected skills.

NEMA has regularly received returnees from neighboring countries who fled the country due to the insurgency and presented humanitarian relief assistance to them. The Agency encourages corporate and individual donors to provide support to the North East region by delivering humanitarian aid directly to affected states.

NEMA is also a part of the Presidential Committee on North East Initiative (PCNI), the Victims Support Fund (VSF),and the Safe School Initiative (SSI), all initiatives of the Federal Government put together to support IDPs in the North East.

In summary, NEMA has provided support to the affected populations living in camps, liberated areas, and host communities and to the refugees across the borders. However, the humanitarian landscape is fast changing due to the successes recorded by the Nigerian Military with the support of Multi-National Joint Military Task Force (MNJTF) in the fight against Boko Haram insurgents. The focus is gradually shifting towards Reconstruction, Rehabilitation, Resettlement, Recovery and dignified return of IDPs back home while process for the return of Nigerian refugees from neighboring countries is equally on-going. This is a cross-cutting, multi-stakeholding, multi-disciplinary and cost intensive endeavor requiring support from all stakeholders.

It’s interesting to mention that while local and international humanitarian responders including the UN system and public spirited individuals have given valuable support towards overcoming the humanitarian crisis in the North-East, there is no doubt that the Federal Government has played the greatest role in this endeavor. NEMA will continue to support and work towards bridging the identified gaps in humanitarian response through enhanced coordination, capacity building and strengthening of collaboration with the affected States and relevant stakeholders including line MDAs, local and international response organizations and the UN system.