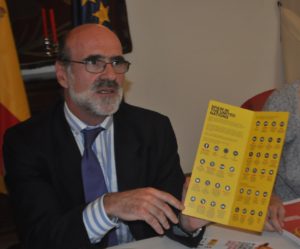 The Ambassador of Spain to Nigeria, Ambassador Alfonso Barnuevo said his country is open to Nigeria for business investment especially area irrigated farming.

The Ambassador disclosed this on Friday 9th November, 2016 when he paid a courtesy visit to the minister in his office.
According to Mr. Alfonso, Spain has been doing business in Nigeria for the past decades in oil and gas, and they are set to diversify into agriculture. He added that the country is in the process of building solar farming technology that would help boost their agricultural investment.
He called on Nigeria to key in in the new technology as Nigeria is trying to diversify its economy too.
Responding to the Ambassador, the Honourable Minister of Water Resources, Engr. Suleiman H. Adams, FNSE, stated that Nigeria would be interested in the solar farming Spain is proposing as the country is currently diversifying its economy from oil base to agricultural driven economy.
“One of the things we want to do as a country in irrigation farming is to make it cheap in technology, we need to conserve water for irrigation”, he said.
In his passion to actualize the irrigation policy of the Federal Government, the minister disclosed to the Ambassador that he would be embarking on study tour to Spain on irrigation felicity of the country and how Nigeria could benefit from it.
The Minister and the Ambassador of Spain agreed that there is the need to have a Memorandum of Understanding (MoU) to concretize the business discussion of the day.
Margaret E. Umoh
Director (Information & Public Relations)