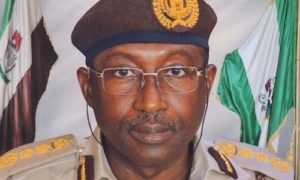 The Comptroller-General of Immigration, Muhammed Babandede MFR demonstrated his intention to build a well-motivated workforce, as he gave award to four personnel for their outstanding gallantry in the ongoing Operation Lafiya Dole in the North-East, and 18 officers and men who have distinguished themselves in their various duties.

The event tagged – Service award for outstanding Performance for 2016
took place in the evening of Monday, 19 December, 2016 at the frontage
of the Shehu Shagari Complex, NIS Headquarters Abuja.

According to the CGI, “the officers being recognised passed through different stages of screening, after which they were considered deserving of the prestigious award”. He called on the awardees to continue to do their best, while challenging the entire workforce to be faithful to the core values of the Service.

In his remarks, the Honourable Minister of Interior Lt. Gen Danbazau, commended the CGI for enabling this occasion where outstandingperformance is being rewarded particularly for those four gallantpersonnel who put their lives on the line to ensure the safety of the UN officials’ convoy when they came under fire recently in the North-East. He assured that the ministry would continue to motivate staff for optimal performance. He urged the NIS to remain steadfast in
its critical role in the nation’s internal security matrix.

Highlights of the event include cultural performance from Abuja cultural troupe.