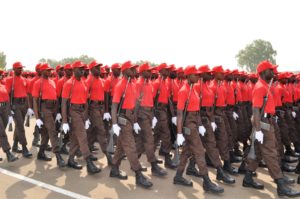 The Economic and Financial Crimes Commission, EFCC on January 13, 2017 graduated 331 cadets of the Detective Assistant Grade, trained alongside 1498 officers of the Nigerian Air Force at the Ground Training School, Nigerian Air Force Base, Kaduna.
The colourful passing out parade climaxed 6 months of rigorous training to equip the officers with the relevant skills of law enforcement.
Speaking at the occasion, the Chief of Air Staff, Air Marshall S. B. Abubakar, who doubles as the Reviewing Officer, congratulated the operatives of the EFCC for their gallantry and brilliance.
“I want to congratulate the operatives, I am sure you will find the training useful in your career”, he said.
Abubakar, while listing the qualities exhibited by the new operatives of the EFCC said, “I have been briefed that you demonstrated commitment, hard work and courage during training. These attributes are essential in your career progression”.
He expressed delight over the collaboration among law enforcement agencies which made NAF to train EFCC operatives alongside NAF recruits adding that, “this cooperation remains a practical step towards enhancing inter-agency partnership, necessary to effectively respond to the national security imperative”.
Abubakar admonished all the graduands to be loyal to the federal government by being patriotic, vigilant and be of good conduct. He also charged them to always remember that their duty is to protect all Nigerians irrespective of their ethnic or religious inclinations.
In his remark, the Acting Chairman of the EFCC, Ibrahim Mustapha Magu, who was visibly excited, expressed his satisfaction with the training hoping that the synergy between the two organizations would be sustained.
The newly graduated operatives comprise of individuals who were picked from across the 36 states of the federation and the FCT through a rigorous screening process that featured aptitude test, fitness test and oral interview.
The operatives include 51 females and 280 males.
Three individuals: Mustapha Suleiman, Ogbuefi Wisdom and Ogbaji Paul were recognized for exceptional performance in all written examinations and practical tests and for high degree of discipline, physical fitness and demonstrable leadership.
Highlights of the event include the silent drill, quick match and different military demonstrations.
As a demonstration of the bond between the EFCC and Nigerian Air Force, the acronym of both organizations was displayed in the silent drill.
Wilson Uwujaren
Head Media & Publicity