Home National Smuggling And Evasion Of Duty On Vehicles Imported Through Land Borders Is... 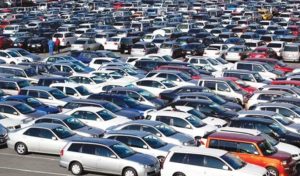 The hues and cries about a ban on importation of vehicles through land borders by the Federal Government were borne out of lack of knowledge of the immense contribution of this policy to our economy. The desire to shortchange the nation through avoidance of tariff by smugglers is at the root of the imposition of this ban. This is averse to a commitment made by some of the stakeholders to drive and energize the auto policy and value chains that are expected in auto sector as enunciated in the Nigeria Industrial Revolution Plan (NIRP).

Nigerians are aware of the large volume of business activities going on in border areas of our neighboring countries regarding auto business. Statistics has it that 90% of vehicles imported to Benin Republic are destined for Nigeria market. The value chain of these business activities cannot be easily quantified because it started from importers cascading down to port agents, customs, interpreters, food and drink vendor, mechanic, commercial transportation and others.

The question is: why sea port is not attractive to importers of vehicles? Most prominent answers from Nigerians doing this business is that, it is  cheaper to use land borders, avoiding bottlenecks in clearing their vehicles, lack of space and prevention of accumulation of demurrage at the port.

However, they will never disclose shady deals going on at the land borders. Benin Republic has many official and unofficial entry points into Nigeria. Smugglers used both for their nefarious activities. Shaki axis in Oyo State, Idiroko in Ogun, Iseyin axis in Kwara and popular Seme in Lagos with a high volume of activities. Also from Cross River through Mfun into Cameroon. In the Northern part of the country which is noted for many unofficial entries starting from Jibia, Kastina into Niger Republic as well as Sokoto and Bornu axis have entries into Niger Republic. Mallam Fatori in Bornu again has entries into Chad and Cameroon.

Some of Nigerians officers charged with responsibilities of manning these official entries post had abdicated their duty because of peanut from smugglers. The non-official routes were left to the smugglers to thrive because of the dangerous nature of these routes. Nigeria Customs usually avoid these routes because of inaccessible terrain for vehicles and the only option left for them is to wait for the smugglers on tarred roads.

From Baga to Mallam Fatori in Bornu state, you take nothing less than five hours on a desert without tarred road. It is only vehicle with auxiliary gear such as jeep that plies the road. On the way to Mallam Fatori, you rarely come across Nigeria customs. It is Military personnel of Nigeria, Niger and Chad you come across in that expanse of land. Even Mfun in Cross Rivers and Kastina side of the borders that led to Niger and Cameroon respectively have tarred road that lead you to Nigeria Customs post, there is still many of unofficial routes used by smugglers.

Nigeria land borders are porous and a gate way for economic loss to this nation because of undocumented transaction taking place in these border areas. Notable of these are the unhindered smuggling of fake and adulterated goods, vehicles, dangerous weapons that have continue to fuel insecurity in the country.

The result of this unpatriotic attitude is that we had created commercial hubs for our neighbors in order to avoid payment of correct tariff to the government. Although the duty rates chargeable for motor vehicles at both land borders and seaports remain the same, importers of these vehicles exploit the various unofficial routes within land borders to smuggle vehicles through the porous borders or compromised some customs officers to have their way.

Importation of vehicles through the land borders constitute major revenue leakages to the government because import duties that should have been paid to Nigeria government end up in the coffers of neighbouring countries.

It is worrisome that our legislators would succumb so easily to pressure from those fleecing the nation of it revenue by advising Federal Government to stop ban of land importation of vehicles through borders having participated in the process of formulating auto policy for Nigeria.

The thrust of the national automotive policy is to encourage in the short term, patronage of locally assembled vehicles and ultimately, the manufacture of made-in-Nigeria vehicles. The project is expected to create employment opportunities locally, and boost technological development. It is also projected that this will reduce significantly the $3.4 billion expended on vehicle importation annually. The automobile policy has been structured to encourage Original Equipment Manufacturers to invest in Nigeria to create jobs and develop our economy

This policy takes into consideration the value chain and promotion of backward integration in the sector. The small and medium scale manufacturers in Nnewi, Anambra and Enugu will be patronized by local assembly. Four coal rolling plants in the country will be kept busy. In terms of fabric, the rejuvenated textile and garment will partake in the sector. Also, petrochemical industry (Indorama) and recent new investment in the petrochemical industry by Dangote will contribute substantially to a plastic part of the vehicle. Dunlop and Michelin had been incentivize to reopen their manufacturing plant in Nigeria while INNOSON, PAN (Peugeot), NISSAN, Volkswagen, Hyundai, Kia, are already producing vehicles using Completely Knocked Down vehicles (CKDs);   Semi-Knocked Down  1 (SKD1) vehicles and Semi Knocked Down 2 (SKD2) respectively.

In addition to this, government in collaboration with stakeholders is promoting automotive supply park and clusters that will ensure that they have shared facilities, infrastructure which will reduce their cost of production and would make it a specialized area. Lagos-Ogun -Oyo-axis, Kaduna-kano and Anambara-Enugu areas are going to form theses parks and clusters.

Policy inconsistency, lack of patronage and influx of second hands vehicles have undermined the development of the automotive industry in Nigeria. These are well-known facts to ordinary citizens and professionals and there is the need for government to protect the investment of Nigerians and foreign partners in auto industry. It is on record that the issue of smuggling is one of the reasons that major Original Equipment Manufacturers (OEMs) like Toyota delayed their entry into Nigeria auto sector.

We are not junk nation that will be happy to use second, third-hand vehicles from abroad. Automotive industry plays both strategic and catalytic roles in economic development, employment creation, wealth generation, small and medium enterprise development, skills development and technology acquisition.

At full capacity, the Nigerian Automotive Industry has the potential to create 70,000 skilled and semi-skilled jobs along with 210,000 indirect jobs in SMEs that will supply the assembly plants. 490,000 other jobs would also be created in the raw material supply to industries. Currently, about 3500 persons are directly employed by the assembly plants.

If our auto policy is implemented fully, it will enable the country acquire the technologies of mass production, quality control. Lean manufacturing, computer-aided design, manufacturing, and engineering which can develop other sectors of the economy and industrialization. In addition, the import restriction through land borders would increase capacity utilization for local auto manufacturers.

The ban on importation of vehicles through land borders will help in channelization of motor vehicles to seaport which aligned with auto manufacturers called on the government to strengthen the regulatory and oversight agencies to effectively monitor implementation of the policy to curtail smuggling in Nigeria.

Higher volume of vehicle cargo for shippers will boost capacity and optimize use of facilities at our ports and car parks. Higher revenue for the 3 tiers of government and facilitates collaboration among Nigeria Customs service, Federal Inland Revenue Service (FIRS),, Motor license office, Police and Bureau of Statistics.

The Transnational Border markets when fully implemented are expected to create more than five (5) million direct and indirect jobs, formalize the informal trade activities, modernize the border posts with the associated infrastructure as well as curb the influx of substandard and hazardous goods into the country.