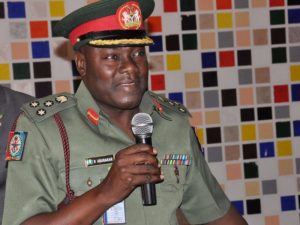 The Chairman of the Forum of Spokespersons of Security and Response Agencies (FOSSRA), Brigadier General Rabe Abubakar has called on the media organisations to partner with security agencies towards a better-informed society.

General Rabe who is the Director Defence Information, made the appeal at the relaunch of FOSSRA which was established in response to the need for harmonization and effective dissemination of defence and security information to the public.

Rabe admitted that in the past there were cacophony of conflicting voices and crisis reports by different security and response agencies in times of crisis prior to the formation of FOSSRA.

He said: “There was weak coordination and non-existent harmonization of information released to media by the agencies. It was more like unhealthy competition and bitter rivalry as agencies that are working ought to be working towards our national security goals were striving to outwit each other ion disseminating information.

“We specifically invited the media for their cooperation as we re-launch the forum and rekindle the spirit of partnership between the security sector and the media.

“This paradigm shift is very important now more than ever before.  We want to once again seek your hands of fellowship and to bridge the communication gap between the security agencies and the media which hitherto may not have been very smooth.

“We would like to also request that in times like this, media reports of security matters should foster national security, harmonious coexistence and should be in the interest of national unity. The media should help educate the citizenry against hate and divisive messages and comments that are prevalent especially in the social media domain.

“There is nothing much we in the defence/security sector can achieve without your valued cooperation. That is why we carry you along in all we do. Today, marks the beginning of a transparent and mutual partnership that would propel our national aspiration as a united country.”

On the status of the forum, Brigadier General Rabe said that “FOSSRA is the only recognized body of spokespersons of security and response agencies in Nigeria. No other such platform is allowed to operate anywhere in the country. This is duly communicated to and approved by the National Security Adviser and the Chief of Defence Staff.

“FOSSRA has the capacity to serve both strategic and operational purposes considering the critical role of information management in the success or otherwise of any security or intelligence operations. We believe that FOSSRA fits into the strategic communication inter-agency policy and coordination to ensure synchronization and implementation of strategic communication plans which is coming up soon.

Also, speaking at the occasion, the Executive Secretary Centre for Crisis Communication (CCC), Air Commodore Yusuf Anas (Rtd) pointed out that the establishment of the FOSSRA and its partners has graciously reduced the incidence of conflicting information management and sharing during crisis situation.

While commending the relaunch of the forum, Anas said: “The Centre for Crisis Communication is a brain-child of FOSSRA and the Secretariat of the forum which 17 agencies from military, security, intelligence and response agencies as members. The relaunch of the forum would encourage healthy interactions and exchange of ideas among the agencies for national stability and development.  It is my candid prayer that this year shall usher in for us even a more robust relationship.”