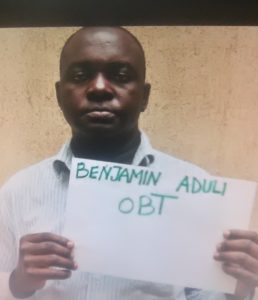 The Economic and Financial Crimes Commission, EFCC, on February 9, 2017 arrested one Benjamin Aduli for offences bordering on criminal breach of trust and obtaining by false pretence.
Operatives of the EFCC got wind of his nefarious activities through a petition by one of his victims. According to the petitioner, Aduli claimed that he could “help source for a loan facility of $30 million in Dubai” that would be used to finance Fleet farms, a company belonging to the petitioner.
Having convinced the potential investor of the “good deal”, he demanded for a contributory fee of $154,146 which he claimed would be remitted to ABA investment LLC in Dubai as “a condition for accessing the loan”.
Not sensing any foul play, the petitioner paid the said sum to a Micro Finance Bank on the instruction of Aduli, for onward remittance as promised.
However, since payment was made, no loan was provided for the petitioner, while the money was never returned.
The suspect will be charged to court as soon as investigations are elapsed.
Meanwhile, the EFCC is currently intensifying investigations into the shady activities of a serial fraudster, Adeolu Adeyanju, who in spite of being behind bars is still defrauding unsuspecting individuals.
His fraudulent activities out of the prison yard, came to the fore after a complainant, a friend to a director at the Petroleum Products and Marketing Company, PPMC, petitioned the EFCC that Adeyanju conned him into paying him N9 million.
His modus operandi was to clone the telephone number of the director, using same to instruct the petitioner to “make a payment for 50 trucks of petroleum products to Detwinx Global Services Limited”, which he did.
But on the receipt of the money, Adeyanju found a way to get N7.4 million transferred to a bureau de change operator, who converted same to its dollar equivalent, while keeping N1.5 million in his personal account.
The suspect is said to have several aliases with which he uses to defraud people, and at the moment also has cases pending before the Independent Corrupt Practices and Other Related Offences Commission, ICPC, the Department of State Services, DSS, and the Nigeria Police. He would be arraigned as soon as investigations are concluded.
Wilson Uwujaren
Head Media & Publicity
15th February, 2017