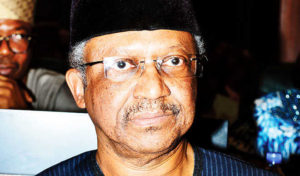 As the dateline for the closure of the Abuja International Airport draws near, the Minister of State for Health, Dr.Osagie Ehanire has rated high the Nigeria Air Force(NAF) Base Hospital, 44 Army Hospital and St.Geralds Catholic Hospital all located in Kaduna metropolis.
The Minister gave the commendation in Kaduna at the week end when he embarked on facility tour of the hospitals chosen for referrals ahead of the dateline given for the temporary closure of the Abuja International Airport to pave way for the maintenance of the airport runway.
It would be recalled that the Federal Government recently announced 8th March, 2017 as dateline given for the closure of the Nnamdi Azikiwe International Airport Abuja over a six week period for the repair of the runway and transfer its operations to Kaduna Airport.
He explained that he embarked on the inspection tour of the facilities at the hospitals to ascertain the hospitals state of readiness to handle accident emergencies in the event of any unfortunate incidence.
‘’Government is determined and resolute to ensure commuters’ safety, there is no room for complacency, we don’t want to be caught off guard’’. He added.
Conducted round the NAF Hospital, he said that the hospital was chosen as the first port of call because of its proximity to the Kaduna airport.
Group Captain Gideon Bako ,the Director in charge who conducted the Minister round the hospital assured that the hospital had long before now had assembled  capable emergency team capable of handling emergency situations. He said: ‘’we have the equipment, we have the manpower and we are equal to the task to response to emergencies’’.
The Minister later paid a courtesy visit to the Executive Governor of Kaduna State, Mallam Nasir El-Rufai who was received by the Chief of Staff to the Governor, Muhammad Bashir Saidu.
Dr.Osagie assured that the maintenance of Abuja-Kaduna highway  corridor and the upgrade of health centres along the highway had already received attention, stressing that it was envisaged that during the closure of the Abuja Airport, there was going to be monumental increase in vehicular and human movements which always come with attendant consequences.
To this end, he called on the Kaduna State Government to expedite action on the refurbishment of Doka General Hospital situated along the Abuja-Kaduna highway to provide emergency care.
He reiterated that the First Aid Centres and Primary Health Care Centres along the highway were being upgraded to take care of minor injuries, while severe cases would go to the referral hospitals which also include the National Hospital, Abuja and the University of Abuja Teaching Hospital, Gwagwalada.
He assured the public that Government was on top of the situation adding that the Federal Ministry of Health was collaborating with the Federal Road Safety Commission, Federal Fire Service, Nigerian Police, NEMA, Ministry of Defence, Aviation Ministry, Kaduna and Niger State Governments to drive this process.
‘’This is a pilot project to provide emergency response on our highways and would be sustained. We would replicate this service along other highway corridors to give fast and competent response to emergencies’’. He added.
Responding, the Chief of Staff, Muhammad Bashir Saidu assured that the Kaduna State Government would support the Federal Government’s efforts to drive this process to fruition.
Boade Akinola
Director (Media &Public Relations)