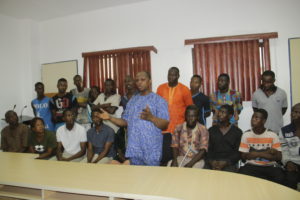 It will be recalled that consequent on the unfortunate clashes, disturbance of public peace and mayhem that occurred in Ile-Ife, Osun State on the 8th of March, 2017 which resulted in the loss of innocent lives, destruction of properties worth Millions of Naira, and the need to put an end to the crisis, the Inspector General of Police, IGP Ibrahim K. Idris NPM, mni, deployed Police Special Intervention Force, comprising Five (5) Units of the Police Mobile Force (PMF specially trained Anti Riot Policemen), Five (5) Cells of Counter Terrorism Unit, Conventional Policemen, Special Anti Robbery Squad, Intelligence Response Team, Technical Intelligence Unit, SIB, detachment of EOD, Police K9 (Sniffer Dogs Section), with their Headquarters in Ile-Ife, led by the Commissioner of Police in charge of PMF, Force Headquarters, Abuja.
The operations covered the entire Ile-Ife and environs, and other flash/trouble spots in Osun State, and was successfully executed leading to the arrest, detention and investigation of thirty eight (38) suspects out of which Twenty (20) suspects were found culpable for direct and indirect participation in the killing of innocent people, maiming and destruction of properties of the victims worth millions of naira, they will be prosecuted on completion of investigation, while the remaining eighteen (18) suspects have been released unconditionally for lack of prima facie evidence against them yet ( Find attached list of the suspects to be prosecuted and those released unconditionally).
Brief facts: On Tuesday, 7th March 2017 at about 2010hrs, one Alh. Nasiru Abdul Magaji ‘m’ of no. 50, Sabo Street, Ile-Ife, Osun State reported at Moore Police Station that one Oba Ademola Ademiluyi ‘m, the Lawarikan of Apoje land, one ELUWOLE  Akeem ‘m’ (a.k.a Escort) and Kuburat wife of ELUWOLE  Akeem ‘Escort’ all of Ile-Ife, brought some hoodlums with cutlasses and other dangerous weapons to attack the Hausas resident at Sabo area of Ile Ife over a fight between one Abubakar Mohammed ‘m’ of Sabo and Kuburat the wife of ELUWOLE  Akeem ‘Escort’. The affray which arose from an altercation between the said Kuburat and Mohammed, was amicably settled on Monday, 6th March 2017.
Based on the report at the Moore Police Station, a case of conduct likely to cause breach of peace was made against the duo of Kuburat and Mohammed and on getting to the scene; the Police team met two groups comprising the Hausas and the Yorubas throwing stones at each other. The riotous groups were dispersed and calm was restored. The responding Police teams maintained presence at Sabo area of Ile Ife up till the next day. Unexpectedly, on Wednesday 8th March, 2017, the peace of the area was shattered with the eruption of crisis that led to the gruesome killings of forty-six (46) people. A total of ninety-six (96) other persons were taken to Obafemi Awolowo University Teaching Hospital (OAUTH) out of which eighty one (81) of them were treated and discharged, while Fifteen (15) of the victims are still on admission receiving treatment.
The Special Intervention Force deployed to quell the crisis did not engage in indiscriminate arrests as being reported in some media but worked on actionable intelligence and other information gathered during and after the crisis. And that is why eighteen (18) suspects found not to be involved in the crisis were released unconditionally.
Traditional rulers, religious leaders, public office holders, politicians, opinion leaders, parents and guardians are hereby called upon to prevail on their subjects, supporters, children and wards to support the personnel of the Police Special Intervention Force still on ground in Ile Ife and other flash points in Osun State in the discharge of their responsibilities, and propagate peace, demonstrate love, and tolerance to promote harmonious coexistence with their brothers and fellow citizens, irrespective of religious, ethnic or political inclinations and differences.
The Inspector General of Police hereby assures the good people and communities of Ile-Ife and other parts of the state of adequate security and protection of their lives and properties and enjoins them to be law abiding and give a chance for peace to prevail.
CSP JIMOH O. MOSHOOD
Force Public Relations Officers
Force Headquarters
Abuja.