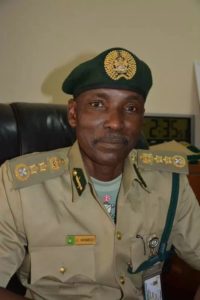 The Deputy Governor who spoke on behalf of the Executive Governor of Plateau State Rt. Hon. Bar. Simon Bako Lalong, appreciated the contributions of the Nigerian Prisons Service to national security and further pledged to support the service in order to increase her yield to the State and the nation as a whole.

The Assistant Controller General of Prisons in an earlier message thanked the Government of Plateau State for bringing succor to the inmates within the command through payment of fines for the indigents, and provision food stuffs especially during festive periods. He also commended the high level of synergy observed between the Plateau State Government and the Nigerian Prisons Service.

The visit was part of the routine quarterly inspection tour of Prisons formations within the command by the Zonal Coordinator, Zone ‘H’; aimed at gaining the on-the-spot knowledge and assessment of the facilities, staff and inmates administration in the command. The Assistant Controller General inspected staff parade, infrastructural facilities, logistics, medical and health services in the various formations visited.
SIGNED
LUKA AYEDOO
ASSISTANT SUPERINTENDENT OF PRISONS
COMMAND PUBLIC RELATIONS OFFICER
PLATEAU STATE COMMAND