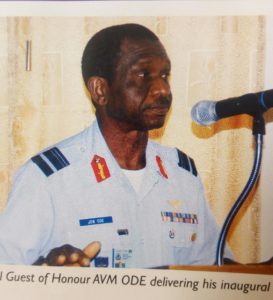 Jaji said the Joint Committee comprising Committees of National Security and Intelligence and Public Procurement was set up after a lot of petitions were received by the Lower Chamber against the presidential investigating panel established by the government.

He said: “The Presidency set up a presidential committee on armed procurement and the Office of the National Security Adviser also set up another verification committee to ascertain some of the claims.

“So far what the committees have submitted, based on the information in the public domain are preliminary reports rather than full and comprehensive report.

“Findings have further shown that very few claims of the firms involved in arms procurement have so far been verified while nothing is being done on others.”

“As you are aware the National Assembly has received a lot of petitions and complaints over the conducts of the panel and activities of the firms being probed. We are also inundated with complaints that the inability of the panel to submit its reports has led to the failure of the government to pay arms contractors for their work and is affecting military operation.

“Meanwhile there are also allegations that some of the contracts awarded to the firms were outrageous, apart from the fact that many did not follow due process and yet others received payment without carrying the job”

PRNigeria recalls that the lower chamber of the National Assembly, mandated a Joint Committee on National Security and Intelligence and Public Procurement to investigate the Jon-Ode led Presidential Arms probe panel which was recently disbanded by the federal government.

The Joint Committee chaired by both Hon. Aminu Sani Jaji of Committee on National Security and Intelligence and Hon. Oluwole Oke of the Committee on Public Procurement had recently called for submission of written memoranda/position papers from top government officials and 241 firms.

The arm probe panel was inaugurated in 2015 by the Presidency to investigate procurement of hardware and ammunitions in the Armed Forces from 2007 to 2015 and to identify irregularities and make recommendations for streamlining the procurement process in the military.

The panel had submitted its first interim report in November 2015 while it presented the second report in January 2016 following which President Muhammadu Buhari ordered the Economic and Financial Crimes Commission (EFCC) to investigate some serving and retired military officers, mainly from the Nigerian Air Force (NAF).

The President also directed investigations on the roles of the officers as well as some companies and their directors in fundamental breaches associated with the procurements by the Office of the National Security Adviser and the Nigerian Air Force. During their investigations, some members of the arm probe panel were accused of receiving bribes from individuals and companies that were being probed by the same panel. One of the members was later arrested and detained by Department State Service for money-laundering and illegal possession of firearms.