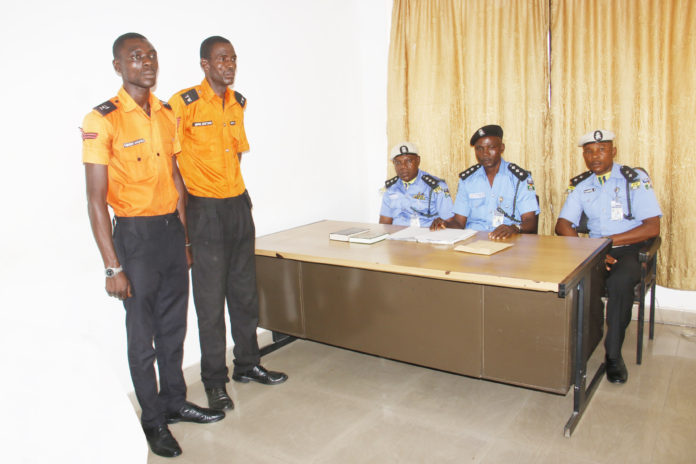 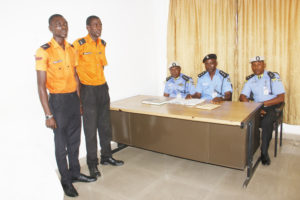 IGP Idris “we will not allow corrupt practices to continue”
Two Traffic Wardens F/No. 394120 GDI Musa Muktari and F/No. 10627 GDII Shuaibu Suleman attached to Wuse Police Division, FCT Abuja Command have been dismissed from service with immediate effect for corrupt practice. This followed an Orderly Room trial at the Provost Department, Force Headquarters Abuja in which both wardens were found guilty of abuse of office, soliciting and receiving a bribe contrary to Paragraph  C sub (IV), (VI) and (II) of the 1st Schedule of the Police Act and Regulation CAP 370 of 1990.
THE CASE AGAINST THE EX-TRAFFIC WARDENS
On 30th May, 2017 a motorist Mr. AG (real name withheld) came to the Public Complaint Rapid Response Unit (PCRRU) FHQ Abuja and reported that while driving his vehicle on 29th May, 2017 (12:30pm) along Wuse market road he was accosted by two Traffic Wardens who accused him of “beating traffic light” despite the fact that he did not. That the wardens started demanding for bribe before they will allow him go and they led him to an Automated Teller Machine (ATM) not far from the scene where he was forced to make a withdrawal of Fifteen Thousand Naira (N15,000) from his account which he gave to the traffic wardens. He also stated that that one of the wardens forgot his mobile phone in his car.
PCRRU immediately launched an investigation (Tracking Number PCRRU475669), both traffic wardens where identified and apprehended. The sum of N15,000 earlier extorted from the complainant was recovered from both wardens (N7,500 each as money was already shared).
Both wardens were subsequently defaulted and referred to the Force Provost Marshal FHQ Abuja for Orderly Room trial [photo attached] during which all witnesses were called, exhibits were presented and defaulters (both wardens)  heard. The Adjudicating officer found both defaulters guilty as charged and recommended punishment of dismissal from service. The orderly room proceeding has been reviewed by the appropriate NPF authority and the punishment approved with immediate effect. Traffic warden uniforms, ID cards and all police accoutrements issued to the men have been retrieved and all other dismissal procedure completed.
The complainant has also been handed back his N15,000 [photo attached] with an apology from the PCRRU. The visibly delighted man while collecting his money said “I never thought this could happen in this country; the officers punished and my money returned to me. God bless the IG, I will go out and spread the news about PCRRU to everyone”.
Meanwhile, the Inspector-General of Police, IGP Ibrahim Idris NPM, mni has commended the complainant for exposing this unprofessional and unacceptable conduct of these traffic wardens, he also stated that “we will not allow corrupt practices to continue”. IGP equally enjoins members of the public to make use of the PCRRU platform which is available 24/7.
PCRRU says No to Impunity, as promised our quick response will put a smile on your face.
ACP ABAYOMI SHOGUNLE.
ASSISTANT COMMISSIONER OF POLICE,
PUBLIC COMPLAINT RAPID RESPONSE UNIT (PCRRU),
NIGERIA POLICE FORCE, FORCE HEADQUARTERS,
ABUJA.