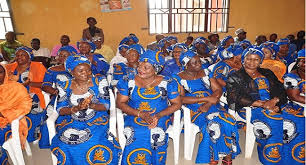 The President of the Nigerian Air Force Officers’ Wives Association (NAFOWA), Hajia Hafsat Abubakar, has promised that the Association would intensify efforts at empowering the unemployed through its skills acquisition programmes.

She made this promise yesterday, 18 July 2017, when the Director of Public Relations and Information (DOPRI) of the Nigerian Air Force (NAF), Air Commodore Olatokunbo Adesanya, paid a courtesy call on her at the NAFOWA National Secretariat in Abuja. She stated that in the past two years, NAFOWA had successfully trained 600 unemployed women and youths through its skills acquisition programme and that more were undergoing training in Port Harcourt.

The Association had also given starter packs to such graduates to enable them become entrepreneurs with their newly acquired skills. In addition, NAFOWA had visited several camps for Internally Displaced Persons (IDPs) in the North East to donate relief materials to IDPs. Hajia Abubakar further stated that NAFOWA would not relent in its humanitarian activities, particularly to the IDPs, as well as to women and youths in NAF Bases and host communities. She also seized the opportunity to commend Air Commodore Adesanya for the renewed dynamism that he had brought into NAF public relations since assuming office as the DOPRI.

Speaking earlier, Air Commodore Adesanya noted that NAFOWA had accomplished much under the leadership of Hajia Abubakar, especially in the area of empowering the unemployed women and youths as well as reaching out, beyond the barracks, to IDPs in the North East. The DOPRI, however, observed that the Association had not received publicity commensurate to its several accomplishments. “It is when your Association’s activities and accomplishments are given adequate publicity that other well meaning individuals and corporate entities could explore the possibility of collaborating with you in your service to humanity”, he added. Considering that NAFOWA’s activities were helping to win the hearts and minds of the populace, particularly in conflict areas, the DOPRI promised to help in further projecting NAFOWA activities for the benefit of all.

The NAFOWA is made up of the wives of serving air force officers, and being a non-governmental association, draws funding for its activities largely from the goodwill of individuals and corporate bodies.