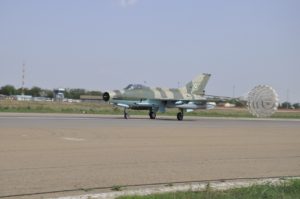 In its continued efforts at boosting the capacity of its personnel in weapons handling and marksmanship, the Nigerian Air Force (NAF) has commissioned another Electronic Range at its Base in Bauchi.

Today’s commissioning brings to 2, the number of electronic ranges commissioned by the current NAF leadership to sharpen the marksmanship skills of NAF personnel.

The electronic range contains state of the art facilities that are comparable to those obtainable in the best military institutions around the world. With the commissioning, the NAF is further positioned to make savings for the nation in terms of the logistics requirements associated with conducting the normal range exercise.

Speaking during the commissioning, the Special Guest of Honour, His Excellency, the Executive Governor of Bauchi State, Barrister Mohammed Abubakar Esq, commended the Chief of the Air Staff (CAS), Air Marshal Sadique Abubakar, for his sterling leadership qualities and for the invaluable sacrifices the NAF is making across the country in ensuring peace and security. “Truly, the NAF has amply demonstrated professionalism and discipline in the conduct of its operations across various spectra. This will no doubt have a multiplier effect on their fighting ability towards ensuring the security of this nation”, he added.

Earlier in his remarks, the CAS stated that the provision of electronic ranges is in line with his vision of repositioning the NAF into a highly professional and disciplined force, especially considering the nation’s current security challenges. “An essential skill for all NAF personnel, be it air or ground crew, is good weapons handling and marksmanship. Consequently, building the capacity and skills of our personnel in weapons handling has become particularly important in view of the various security challenges confronting our dear country”, Air Marshal Abubakar stated. The CAS also announced that an electronic range would be commissioned in Port Harcourt in due course.

In a related development, the NAF also commissioned 3 newly constructed and fully furnished Messes for the airmen/airwomen, senior non-commissioned officers and the commissioned officers in Bauchi. The Messes will provide an informal environment for personnel to socialize, relax and recreate towards fostering esprit de corps. In addition, a newly built and fully equipped Air Force Primary School was commissioned in Bauchi to meet the educational needs of the dependants of NAF personnel and members of the host community. The CAS had earlier in the day paid courtesy calls on the Bauchi State Governor and the Emir of Bauchi, Alhaji (Dr) Rilwanu Suleiman Adamu, CFR.