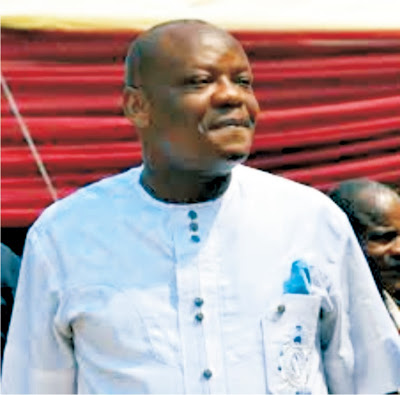 The Independent Corrupt Practices and Other Related Offences Commission (ICPC) has charged a former chairman of Mkpat Enin Local Government Area of Akwa Ibom State, Mr. Ephraim Sunday Akpan, to court for allegedly embezzling N55.8 million belonging to the local government.
The Commission, in 24-count charge, filed before Justice Archibong Archibong of Akwa Ibom State High Court 4, sitting in Uyo, accused Mr. Akpan of abuse office while acting as Chairman of Mkpat Enin local government area, contrary to Section 19 of the Corrupt Practices and Other Related Offences Act, 2000 and punishable under the same section.
The ex-council boss, who was Chairman of the local government from June 2012 to June 2015 and later Caretaker Chairman of the same council from June 2015 to June 2016, was also accused of collecting a bribe of N3 million from a contractor in violation of Section 8 of the same Act and punishable under the same section.
The Commission, while acting on a petition on alleged fraudulent activities of Mr. Akpan from a Non-Governmental Organisation called Centre for International Peace and Development in Nigeria, found out that the former local government Chairman allegedly used N55, 670, 000 of the council’s funds between June and October 2014 to build the ‘Godswill Akpabio Gas and Oil Academy’ which has been abandoned.
ICPC in the charge sheet told the court that Mr. Akpan allegedly offered bribes to some selected village heads in his local government to buy their support for the abandoned academy.
It further alleged that Mr. Akpan, in his statement confessed to have awarded a contract for the construction of 14 solar-powered boreholes in 14 wards of the local government at the cost of N42, 500, 000 to a company called One Billion Trade, owned by his friend, Mr. Sebastine Essien, without the approval of the council.
He also confessed to have paid N36, 500, 000 to the said company for the project which has been abandoned without following due process.
The Commission accused Mr. Akpan of paying N21 million without approval of the council, as first instalment to the contractor and collected N3 million as kickback.
He was again alleged to have ordered the contractor to pay N1 million each to 14 councilors of the local government as a bribe, but one of the councillors was said to have rejected the money.
Mr. Akpan pleaded not guilty to all the charges when they were read to him and was admitted to bail by the court.
Justice Archibong, in his ruling, granted the accused bail in sum of N15 million and two sureties in like sum. The judge further ruled that the two sureties must deposit an affidavit of means and must not be below Grade Level 16 in the civil service or its equivalent.
Other conditions attached to the bail by Justice Archibong included the two sureties bringing letters of identification from two prominent citizens of Akwa Ibom State, as well as showing proof of ownership of landed property within the jurisdiction of the court by presenting the original Certificates of Occupancy of the properties which must be deposited with the Registrar of the court.
The case was then adjourned to 25th October, 2017 for hearing.
Signed: Mrs. Rasheedat A. Okoduwa, mni
Spokesperson for the Commission