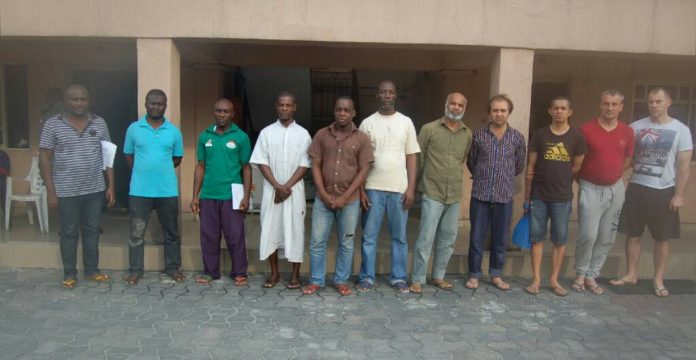 They were remanded pending arraignment and hearing of a 4-count charge bordering on conspiracy, dealing in petroleum products without a license and tampering with oil pipelines.

At the commencement of proceedings for their arraignment on Wednesday, Counsel to the EFCC, Kayode Oni, brought before the court an ex-parte application seeking the leave of the court to hear the defendants’ charge filed during the annual vacation of the court which was granted by the judge.

The counsel to the 2nd -11th defendants, Abiye Atorudibo, however notified the court that the 5th, 6th and 11th defendants who are Ukranians and Indonesians are not proficient in English language and requested that the prosecution provide interpreters for the accused persons.

In response, Oni asked for a short adjournment to get interpreters for some of the foreigners and   remand the defendants in prison as the EFCC’s cell was congested.

Justice Omotoso consequently adjourned the matter to 6 September, 2017 for arraignment and hearing. He ordered that the prosecution provide interpreters for the accused persons and  remanded the defendants in Port Harcourt prison.

Trouble came for the suspects when their ship was intercepted by the NNS DELTA on 25 April, 2017 at Shell Petroleum Development Company (SPDC),  Afremo ‘A’ Terminal, South East of Escravos in Burutu Local Government Area of Delta State,  for illegal loading of petroleum products suspected to be crude oil. It was alleged that the crew members connived with Victor Azeberi (the 1st defendant); one Peter Ala and David Ogoma alias Ambassador, who are now at large,  to siphon about 1905.836 cubic litres of crude oil.

The ship allegedly had no clearance from relevant Nigerian maritime agencies to navigate in Nigerian waters and all the foreign crew on board the ship had no valid documents to enter Nigeria.