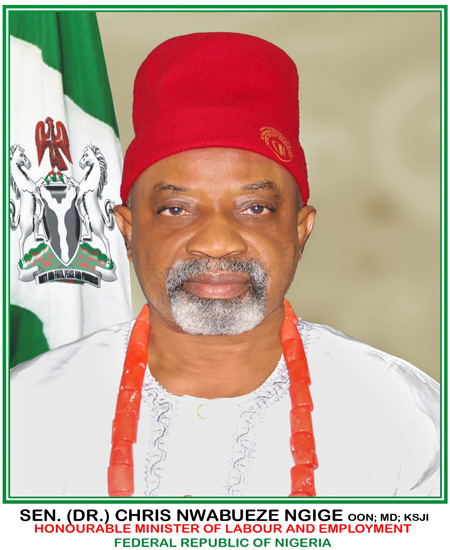 Following the intervention of the Honourable Minister of Labour and Employment, Sen. Chris Ngige, the Association of Senior Servants of Nigeria has agreed to temporarily put off their strike notice until Wednesday, 20th September 2017 to enable the Federal Government to show good faith by commencing the payment of promotion arrears owed to civil servants.
In a meeting brokered as the nation’s chief conciliator, Sen. Ngige said the Federal Government would do all that was necessary to meet up with the demands of the civil servants and the timeline in the agreement.
Among others, the meeting agreed that thirty Ministries, Departments and Agencies (MDA) that the Office of the Accountant General of the Federation reported having cleared their allowances, amounting to 1.165 billion Naira should start to receive credit of payment to their account by Wednesday, 20th September 2017.
It also agreed the office of the Accountant General of the Federation should also provide the list of the 30 MDAs in reference to the office of the Minister of Labour and Employment by Wednesday, 13th, September 2017.
The conciliation meeting further set up a seven-man committee to be chaired by the Permanent Secretary of the Federal Ministry of  Labour , with three members each drawn from the government negotiating team and the Labour Association respectively to oversee the implementation of the decisions.
The Minister had earlier while addressing the union restated the unflinching commitment of the Buhari administration to the welfare of workers.
“The arrears in question accumulated for up to a decade but the President very much concerned about the welfare of the citizens resolved to settle the backlog, knowing that government is also a continuum. This is a government that has the interest of workers at heart, the very reason we stoically refused to retrench any civil servant despite dwindling resources we met and worsened by the recession.  “
He further thanked the civil servants for their patience and resilience which in no small measure contributed to the nation’s exit from recession.
Samuel Olowookere
Deputy Director (Press)