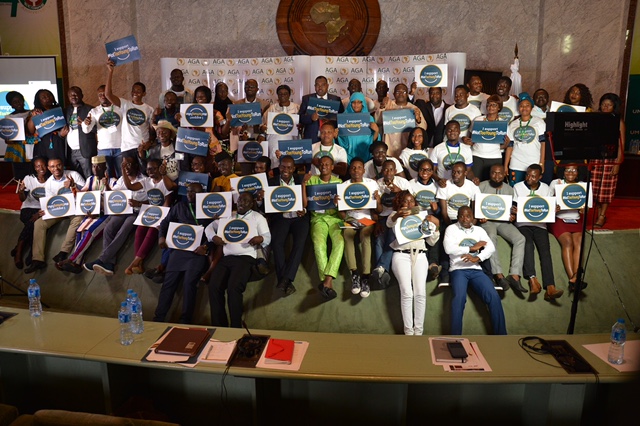 Youth from West and Central African region have endorsed the campaign being spearhead by the African Union (AU) in collaboration with ECOWAS for greater participation by young people as well as women in the political processes of the continent.

At the close of a three-Day Regional Consultation Meeting in Abuja, Nigeria on the 14th of September 2017, they endorsed a reinvigorated campaign aimed at putting youth at the heart of participation in the political processes of their respective countries in Africa.

And as a toast to their resolve, participants at the meeting backed and flagged off the Not- Too –Young- To- Run campaign of the Youth Initiative for Advocacy and Advancement (YIAGA), a civil society group based in Nigeria.

Also deliberated, were the issues of responsibility and civic participation in electoral processes in Africa. There was a validation of the draft AU’s 10-year Action Plan for Human and People’s Rights while the enhancing participation through efficient electoral management processes, participation as a basic human right, the role of youth in the electoral cycle, the creation of powerful and persuasive messages were accompanying topics over which  discussions were held and presentations made.

Some of the envisaged outcomes of the consultation exercise include a robust advocacy to challenge the wrongly held notion that the youth and women are incapable of holding leadership positions as well as sustenance of the advocacy for the reduction of age limits for candidates running for elective positions.

Another bounty from the interactions is the creation of modalities for building synergies with a clearly established platform for sustained youth engagement.

Panel speakers expressed the hope of the possibility of galvanizing youth from West and Central Africa for a more strategic and productive engagement in the political life of their respective countries.

In his closing remarks made on behalf of the African Union Commissioner for Political Affairs, the acting Head of the AU’s African Governance Architecture (AGA), Ambassador Salah Ahmed harped on the need to share experiences learnt from the convergence. He maintained that beyond creating the space “it is up to the youth to claim the space created”.

Speaking on behalf of the ECOWAS Commissioner for Political Affairs Peace and Security, the Head, ECOWAS liaison office at the AU Raheemat Momodu expressed delight at the progress being made through inter Regional Economic Community collaboration as evidenced in the ECOWAS partnership with the Economic Community of Central African States (ECCAS) in the areas of maritime security and human trafficking now being stretched to include youth empowerment.

“Now that we know that the problems of the youth arte the same and that they cut across regions, this calls for serious networking while there is a need for proper documentation as we create a networking memory force together” She added.

The Regional Director of National Democratic Institute (NDI) Mr. Keith Jennings as well as the Head, Research, Policy and Advocacy of YIAGA Mr. Samson Itodo urged the youth to make the utmost of the Pan-African youth force now being created through the platform raised in Abuja stressing that the young people gathered should be in the vanguard of promoting inter-generational dialogue.

About 100 youth from the Western and Central African region participated in the consultation meeting. They are now expected to lead efforts in their home countries with the slogan bearing the # NotTooYoungToRun.

The Consultation Meeting was convened as part of the inter-institutional collaboration between the AU and ECOWAS within the framework of operationalizing the African Governance Architecture (AGA).