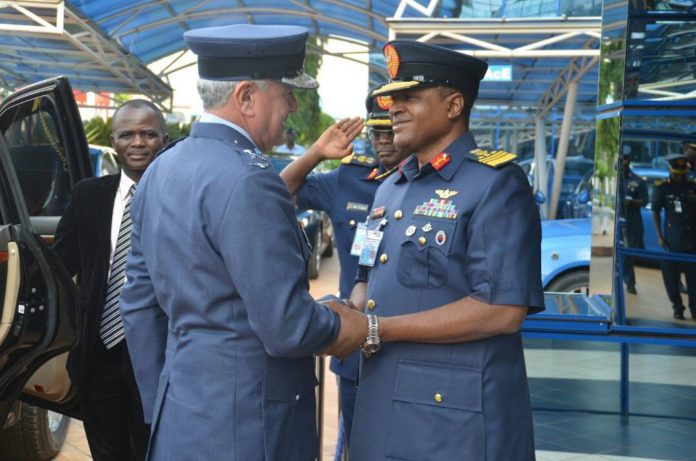 The visiting Commander of the Royal Jordanian Air Force (RJAF), Major General Yousef Alhnaity, has pledged the readiness of the RJAF to collaborate with the Nigerian Air Force (NAF) in the fight against terrorism, militancy and other forms of violent extremism. He made the commitment today, 25 September 2017, during his visit to the Chief of Air Staff (CAS), Air Marshal Sadique Abubakar, at the NAF Headquarters, Abuja. According to him, the world is now fighting a new brand of warfare that requires collaboration. The Commander, who was accompanied by a delegation of officers from RJAF, stated that “Air Power” was the way to go, if the country must contain the war against terrorism. He added that RJAF would provide the NAF with required logistics, aircraft spare parts as well as training of NAF pilots and engineers while soliciting other areas of assistance for RJAF.
In his response, Air Marshal Abubakar said that the 21st Century conflict was characterised with armed fight against non-state actors. He also reiterated that no country could singlehandedly defeat terrorism, no matter how powerful. He added that recent NAF advocacy visits to countries like the United States of America, United Kingdom, Russia, Pakistan, Egypt, Morroco, Saudi Arabia and the Kingdom of Jordan were therefore aimed at building strong partnerships with friendly nations. The CAS stated that the NAF was committed to the budding partnership with RJAF. According to him, three NAF pilots had already been trained in Jordan and another set was about to depart for training. He also indicated the readiness of the NAF to offer assistance to the RJAF, especially in the area of Research and Development in which the NAF has been recording major feats.
The top Jordanian military chief also visited the recently established Air Force Comprehensive Girls School Abuja, where he expressed his satisfaction with the standard of teaching facilities in the school. Thereafter, he paid a courtesy call on the Chief of Defence Staff at the Defence Headquarters. Major General Yousef Alhnaity and members of his delegation are set to proceed on a visit to selected NAF bases, including Maiduguri and Yola, where he would interact with NAF frontline pilots. The NAF would continue to take every necessary step to fulfil its constitutional mandate of preserving the territorial integrity of the nation.
Air Commodore Olatokunbo Adesanya
Director Information and Public Relations