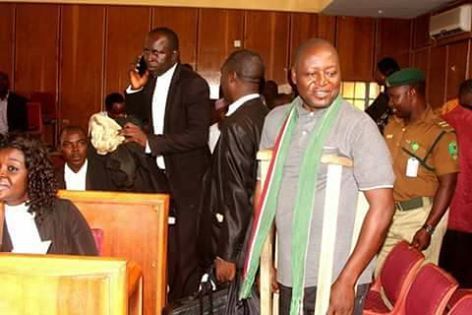 Former Vanguard Correspondent in Kaduna Luka Binniyat today Thursday met all the bail conditions and has been released on bail.
He has been reunited with his family.
On behalf of NUJ Kaduna Council I will like to appreciate all those that contributed in one way or the other to see that Luka Binniyat is out of prison.
He gained his freedom at exactly 12:50PM.
Those at the prison included Barrister James Kanyip his defence lawyer, Chairman NUJ Kaduna Adamu Yusuf who is also the third surety,  his brother Barrister Binniyat Thomas, the two other sureties among others.
He was in prison for 96 days and has been appearing in court before his bail was perfected after a review of the bail conditions on Monday, October 9, 2017.
Signed
Comrade Adamu Yusuf,
Chair Kaduna Council, Nigeria Union of Journalists (NUJ)