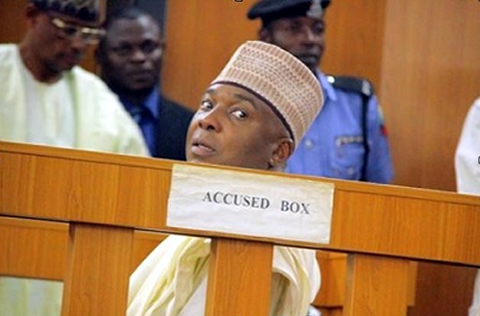 …Saraki to Defend Self on 3 Count Charges

Strong indication has emerged that the Senate President Dr. Bukola Saraki will be back at the Code of Conduct Tribunal for his trial in the False Asset Declaration charges brought against him by the Federal Government.

However, unlike in the recent time, Saraki will only defend himself on three count charges as ordered by the Court of Appeal Abuja Division which in its judgement nullified 15 out of 18 charges against the Senator.

PRNigeria learnt that the tribunal fixed the February 6 date for the resumption of the trial following an application to that effect by lead counsel to the Federal Government, Mr. Rotimi Jacob SAN.

However, PRNigeria gathered that the February 6 date may only be for the mention of the case as the two contending parties, the Senate President and the Federal Government have filed appeal and cross-appeal at the Supreme Court in respect of the decision of the court of appeal.

Although the Administration of Criminal; Justice Act 2015 frown at incessant adjournments of Criminal matters, both Saraki and Federal Government may settle for a stay of the trial, having join issues with each other at the Apex Court.

On his part, the Senate President is praying the Supreme court to uphold the ruling of the Code of Conduct tribunal which in a no case submission discharged and acquitted him on the ground that the charges against him were predicated on hearsay which has no basis in law.

Saraki in the appeal filed by his lead counsel Mr. Kanu Agabi prayed the Supreme Court to set aside the judgement of the court of Appeal delivered on December 12, 2017 which voided 15 count charges against him and ordered him to defend himself from the remaining three.

On its part, the Federal Government has also filed a cross-appeal in which it prayed the apex court to restore the 18 counts charges back to the tribunal for Saraki to defend himself upon.

The grouse of the Federal Government, PRNigeria learnt that the court of Appeal erred in law when it held that 15 charges against Saraki were voided because they were based on hearsay.

However, at the time of this story, the CCT under the Chairmanship of Mr. Danladi Yakubu Umar had issued hearing notices to both Saraki and Federal Government to appear before it on February 6, 2018, to take a common ground.

PRNigeria recalled that the Federal Government had in 2015, filed a 12 count charge bordering on false declaration of asset against Saraki but the charges were increased to 18 due to amendment effected by the complainant.

At the close of the Federal Government case, Saraki had made a No-Case submission to the Tribunal claiming that he was not directly linked with the charges against him, that the charges were based on hearsay and that prima facie case was not established against him.

In his ruling delivered on June 13, 2017 the CCT boss agreed with Saraki that prima facie case was not made against him and that the entire charges were based on hearsay evidence and consequently discharged and acquitted the defendant.