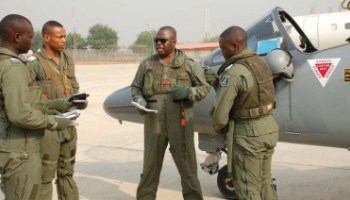 NAF Acquires High-Tech Medical Equipment
The Nigerian Air Force (NAF) recently commenced a 5-day hands-on application and upgrading training for selected medical personnel as part of its capacity building efforts to ensure adequate maintenance and serviceability of newly acquired state-of-the-art medical facilities. The training, which would provide participants with the requisite expertise in the proper handling of the equipment to avoid incessant breakdown, ends today, 26 January 2018. The equipment include Digital X-ray Machines, Fluoroscope, Digitizer, Mammography, Picture Archival and Communication System (PACS), CT Scan Machine and Magnetic Resonance Imaging (MRI) and are already in use in various NAF hospitals across the country.
Participants, who were drawn from various NAF medical facilities across the country, comprise 9 Radiographers, 6 Biomedical Technicians and 2 Radiologists. The training is being conducted at 461 NAF Hospital, Kaduna by seasoned resource persons and facilitators in conjunction with in-house NAF specialists. At the end of the training, participants would have been adequately equipped with the technical know-how to handle various medical equipment on the NAF inventory. Already, 2 Biomedical engineers have completed their one-year mandatory training on high-tech in Lagos while another is currently on going.
The idea behind the training is to ensure the durability of the very expensive NAF medical equipment, most of which were recently acquired. It is expected that this would further enhance the provision of adequate medical services in the NAF, as a way of sustaining the high morale of personnel and improving Civil-Military Relations in NAF host communities.
Meanwhile, the Nigerian Air Force (NAF) has commenced a 5-day medical outreach for the people of Azare in Katagum Local Government Area of Bauchi State as part of the steps being taken by the current NAF leadership at improving access to healthcare delivery for host communities. The medical outreach, which was held at the Azare Township Stadium, attracted large turnout of residents who were grateful to the NAF for its humanitarian gesture and improved civil-military relations efforts with the people of the community. During the 5-day medical outreach, which is expected to end on 28 January 2018, various medical conditions would be diagnosed and treated while those with complex medical cases would be transferred to the Federal Medical Centre, Azare for further medical attention. The Federal Medical Centre, Azare has promised to make available its surgical room to the NAF Medical Team to carry out surgeries throughout the period.
The first day of the medical outreach was attended by the Makama of Katagum, Alhaji Aliyu Hussani who represented the Emir of Katagum, His Royal Highness Baba Umar Faruq. The Emir appreciated the laudable effort of the Chief of the Air Staff (CAS), Air Marshal Sadique Abubakar, in rendering humanitarian services through the provision of free healthcare to the people of Azare. The Emir also thanked the Air Officer Commanding (AOC) Special Operations Command (SOC), Air Vice Marshal Ismaila Kaita for the medical outreach, which he noted, would bring great relief to his people.  During the first day of the event, the medical team from NAF Headquarters and 261 NAF Reference Hospital, Bauchi conducted medical check-up on the patients and screened those who potentially had surgical cases. Furthermore, eyeglasses and drugs were distributed to patients. Other medical activities carried out were de-worming of little children as well as distribution of treated mosquito nets and drugs.
Meanwhile, the NAF has also commissioned 6 additional units of 10 single bedroom apartments for its personnel at the NAF Base Bauchi, as part of efforts to improve welfare of personnel. The newly built accommodation for Non-Commissioned Officers (NCOs) would accommodate 60 families of personnel serving in the North East. The AOC SOC, who represented the CAS at the event, commissioned the new accommodation. In his remarks, the CAS stated that the welfare of personnel and their families was one of the topmost priorities of the current NAF leadership. The CAS thus assured that the Service would not relent in its efforts in providing adequate and conducive accommodation for its personnel. The CAS also expressed appreciation to President Muhammadu Buhari for his support towards ensuring that the Armed Forces of Nigeria is better equipped so as to continually and efficiently defend the territorial integrity of the country.
The unrelenting efforts of the current NAF leadership at increasing accommodation sufficiency for personnel has had a positive effect on the morale of troops that are prosecuting the ongoing fight against insurgency in the North East as well as those involved in other Internal Security operations across the country.
OLATOKUNBO ADESANYA
Air Vice Marshal
Director of Public Relations and Information
Nigerian Air Force
…………………………………………………….