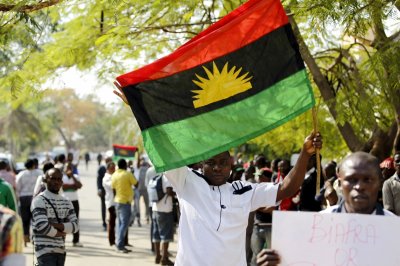 Court Orders Kanu’s Separate Trial, Asks Senator Abaribe to Explain his Whereabout
The Federal High Court in Abuja has ordered the separation of trial of the self-acclaimed leader of the proscribed Indigenous People of Biafra (IPOB), Nnamdi Kanu from that of his three other co-accused persons.
Kanu, Chidiebere Onwudiwe, Benjamin Madubugwu and David Nwawuisi, are currently facing an amended 6 count charge bordering on treasonable felony, terrorism and illegal possession of firearms, preferred against them by the Federal government.
The separation order was sequel to an application brought by Prosecution Counsel, Mr. Shuaibu Labaran.
The counsel, had at the resumed trial sought the guidance of the court as regards further proceedings of the trial taken into consideration the presence of only three of the defendants in court.
According to him, the absence of the 1st defendant (Kanu) having granted bail since April last year has frustrated progress in the case.
“We shall be asking for the indulgence of the court to separate the charges so that progress can be made in the matter”, he pleaded.
However, counsel to the 1st to 3rd  defendants did not object to the separation of the trial.
Ruling on the application, trial judge, Justice Binta Nyako, agreed with the prosecution, that Kanu’s absence since when he was granted bail last year had actually stalled trial of the case and consequently ordered that the trial of kanu be separated from the rest.
Following the ruling of the court, Labaran,  requested for a short adjournment to enable the prosecution amended the charges to reflect the current position of the trial. “We need to do the needful to make the record of the court neater”, he said.
Responding, Eric Ifere, counsel to the 2nd defendant asked the court for a definite trial window and how the case will be conducted to guide counsel in the matter.
Similarly, P.A.N Ejiofor, counsel to the 3rd defendant, urged the court to prevail on the prosecution to ensure the amendment and service is done on time, to enable them adequately prepare their response.
The court consequently adjourned till March 20, 21, and 22 for the amended charge to be read to the defendants and continuation of trial.
The court, however adjourned till, March 28 for the 1st defendant to be produced in court or his sureties appear in court to explain the whereabouts of Nnamdi Kanu.
Earlier, prosecution counsel had told the court that the business of the court yesterday was for Abaribe and two other sureties to show cause why they would not forfeit the bond for Kanu’s bail or for the court to take necessary action provided by the law.
He however informed the court of a letter from Abaribe’s counsel seeking adjournment of the matter on grounds of a matter at the Supreme court.
It would be recalled that the court had on April 25, 2017, granted Kanu bail in the sum of N100m.
The bail was to enable him attend to his ailing health condition.
The judge in addition ordered that the defendant produces three sureties with N100m each.
The court however noted that the sureties to be provided by Kanu should include a highly respected Jewish leader, since according to her the defendant claimed Judaism as his religion.
Another of the sureties according to the judge should be a senior and highly placed individual of Igbo extraction and in the ranking of a senator, while the last is expected to be a respected individual resident in Abuja with proof of ownership of landing property.
In addition Justice Nyako said Kanu must never be seen in a crowd of more than 10 people. “No interviews and no rallies,” said Nyako.
Also Kanu was ordered to deposit his international passport including his British passport with the court, adding that the court should on a monthly basis be furnished with a progress report on the health of the defendant.
But Kanu, has not been seen or heard of since September 12, 2017 when his home in Abia State, was said to have been attacked by men of the Nigerian soldiers.
It can equally not be said that he is alive or dead after the attack but his counsel has continued to claim that he is in the custody of the agents of the Federal government.
By PRNigeria