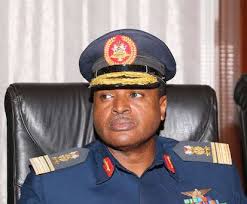 NAF Establishes Quick Response Unit in Nasarawa State
The Chief of the Air Staff (CAS), Air Marshal Sadique Abubakar, has led a delegation of Senior Officers from the Headquarters Nigerian Air Force (NAF) on a courtesy visit to the Executive Governor of Nasarawa State in Lafia on 20 February 2018.
The one-day working visit was in furtherance of the NAF’s plan to establish a Quick Response Wing (QRW) in Lafia and other settlements, especially close to the border between Nasarawa and Benue states.
The CAS disclosed that a careful threat analysis conducted by the NAF revealed that parts of the State, especially the Benue-Nasarawa axis, was prone to crisis, which NAF presence could help reduce and hence, the decision to establish QRWs in Nasarawa State.
He further disclosed that the NAF had already established 10 new units in the last 2 years with the aim of enabling the NAF to add value to the Internal Security situation in various parts of the country. One of such new establishments, according to the CAS, is the Headquarters Special Operations Command, which would also have oversight functions over the QRWs in Nasarawa State.
He equally restated the NAF’s commitment to establishing a Forward Operational Base in Taraba State, as part of its overall commitment to creating an environment where Nigerians would be able to transact their businesses peacefully.
Air Marshal Abubakar assured the Governor of the immediate take-off of the NAF Unit in Lafia, adding that NAF Special Forces, who were at the verge of completing their training, would form the first set of personnel to man the new Unit.
According to him, members of his entourage were carefully selected to be able to advise on the best way of immediately operationalizing the Unit.
Furthermore, he announced that the NAF would construct helipads in Lafia and some identified villages with a view to facilitating smooth conduct of air operations thereby bringing security closer to the people of Nasarawa and Benue States. In addition, the CAS disclosed that the NAF would immediately commence the building of accommodation to cater for the welfare needs of the personnel to be deployed to the QRW. He likewise intimated the Governor on plans to conduct a medical outreach programme to selected villages in the State.
The CAS therefore solicited the support of the State Government in ensuring the smooth take-off of the QRW, particularly by allocating the required lands for the planned infrastructural development.
In his response, Governor Tanko Al-Makura expressed his delight at the visit, remarking that the State had been longing to receive Air Marshal Abubakar because of his apparent sense of patriotism, commitment and dedicated efforts towards Nigeria’s development.
The Governor noted that the CAS had transformed the NAF through capacity building initiatives and had added so much value beyond what the NAF was known for. He was particularly full of praises for the CAS owing to his sustained focus on the welfare of NAF personnel in the area of accommodation, among others.
According to him, “you have painted the whole of the country blue with Air Force structures”.
Speaking further, the Governor commended the role played by the NAF in decimating the capability of the Boko Haram terrorists in the Northeast, noting that the presence of the NAF had become synonymous with resolution of security challenges. He therefore observed that there couldn’t have been a better time for the NAF to establish its presence in Nasarawa State.
He therefore expressed confidence in the ability of the NAF to add value to security and peace in Nasarawa State. In addition, Governor Al-Makura said he was aware of Mr President’s directives for security agencies to take extra measures towards resolving the crisis in the Benue-Nasarawa axis.
Accordingly, he affirmed the readiness of Nasarawa State to collaborate with the NAF to ensure the success of the new QRW in Nasarawa State.
The Governor immediately made available some facilities to be temporarily used for the initial operations of the new NAF unit in Lafia. He also intimated the CAS that the State’s International Cargo Airport was nearing completion and that NAF’s fighter aircraft could possibly operate from it in the future. He then seized the opportunity to announce the donation of one Toyota Hilux vehicle, as part of the State’s contribution to the logistics requirements for the smooth take-off the new NAF Unit.
The CAS was accompanied on the visit by relevant senior officers from HQ NAF and the Chief of Staff at NAF Tactical Air Command, Makurdi, all of who are back in their respective units. Some of the senior officers would be returning to Lafia shortly to finalize arrangements for the immediate take-off of the various QRWs in the Benue-Nasarawa axis. It would be recalled that the CAS recently announced the intention of the NAF to establish additional units to tackle the herdsmen-farmers crisis in some affected states.
OLATOKUNBO ADESANYA
Air Vice Marshal
Director of Public Relations and Information
Nigerian Air Force