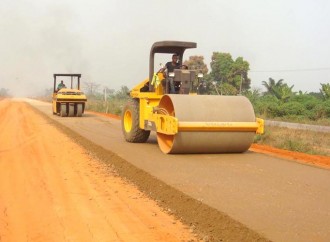 Adequate funding has been identified as a key ingredient to road development and, indeed, all aspects of development. This was disclosed by the Director, Highways, North East, Engr. Rufa’i Mohammed, while on an inspection of on going construction works on Federal roads in the Zone.
While briefing Mediamen, at the end of the Tour of Duty, the Director opined that past Administrations paid lip service to road development financing, stressing that “the entire 2015 Capital Allocation to the Works Sector was a mergre N18 billion compared to over N260 billion in 2016 and N274 billion for 2017., hence the accelerated development of road infrastructure being witnessed, nationwide.”
Engr. Rufa’i observered that though the personnel responsible for planning, supervision, monitoring and development of road infrastructure in the country, in the Ministry and the construction industry remain, largely, unchanged, the financing has significantly changed.
The Director, Highways, North East Zone further disclosed that, apart from increased budgetary allocations, the present Administration of President Muhammadu Buhari has, recently, released additional funds to select 25 – road and brigde projects, under the Sukuk (bonds), a novel financing window hitherto unexplored in the provision of critical road infrastructure, in Nigeria.
Recurring decimals from all the Federal road projects visited in the Zone were increased tempo of work occassioned by adequate funding, out pouring of ecomious on the Federal Government from the contractors, motorists, benefiting communities, construction workers and service providers and, most importantly, reduction in travel time and the cost of vehicle maintenance. None of the Federal Controllers of Works in the States visited nor the Contractors complained about lack of paymen for certified jobs executed.
Some of the projects visited are, but not limited to ; Dualisation of Kano – Maiduguri Road, Sections II ( Shuwarin – Azare in Jigawa and Bauchi States ), III ( Azare-Potiskum in Bauchi and Yobe States ), IV ( Potiskum – Damaturu ) and V ( Damaturu – Maiduguri in Yobe and Borno States ) and the Rehabilitation of Gombe – Numan – Yola Road, Phase II ( Gombe – Kaltungo in Gombe State) and the Emergency Reinstatement of Failed Sections of Gombe – Bauchi Road in Gombe State. Others include the Rehabilitation of Damaturu – Biu Road in Yobe and Borno States, Rehabilitation of Nguru – Gashua – Bayamari Road, Section I, Phase I ( Nguru – Gashua in Yobe State ), Rehabilitation of Nguru -Gashua – Bayamari Road, Section II, Phase I ( Gashua – Bayamari in Yobe State ), Construction of Ningi – Yadagungume – Fuskar Mata Road, Phase III in Bauchi and Plateau States, Construction of Burga – Dull – Mbatt ll – Tandum – Gobbiya – Badagari – Gwarangar – Sum Road in Bauchi State and the Construction of Yalo – Bashar – Dengi Road in Bauchi and Plateau States