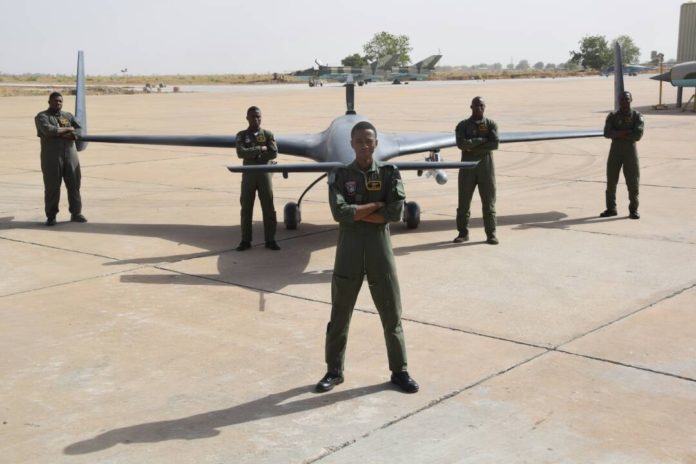 NAF Graduates Drone Pilots
The Nigerian Air Force (NAF) on 2 March 2018 graduated the first set of in-house trained pilots for its Remotely Piloted Aircraft (RPA), as part of the human capacity development initiatives of the current NAF leadership.
The 5 newly trained RPA pilots were decorated with their ‘wings’ by the Chief of the Air Staff, Air Marshal Sadique Abubakar, at the Nigerian Air Force (NAF) Base at Maiduguri. The training of the new Pilots commenced in 2016 at the 401 Flying Training School, Kaduna, following which they later converted on the CH-3A RPA.
The CH-3A RPA conversion training, which started in May 2017, covered areas such as Ground Academics, General Airmanship, Instruments, Situational Awareness, Radiotelephony, Boldface exercises as well as handling of simulated and real emergencies. The entire programme lasted about 2 years while the CH-3A RPA specifics phase lasted for 10 months, culminating in check rides for each of the 5 new RPA pilots. At the moment, the new pilots each have nearly a hundred hours each on the CH-3A RPA.
The CH-3A RPA, which formed part of the training platforms, is currently deployed in the North East, where the Air Task Force of Operation LAFIYA DOLE is using it against Boko Haram Terrorists (BHTs). With several hundreds of flight hours on the CH-3A RPA alone since induction three years ago, the NAF has developed commendable experience in its RPA operations. In the process, the CH-3A RPA, in combat role, has successfully delivered its ordnances against BHTs targets with high degrees of precision and accuracy, both day and night. With the recent feat of being able to train the pilots of the RPA in-house, the NAF is now poised to train additional batches of Student Pilots for its RPAs. This would ensure the availability of the required manpower, at minimal cost, to man the NAF’s RPAs, which are expected to increase in the coming years.
It would be recalled that the NAF recently inducted the first indigenous operational Unmanned Aerial Vehicle (UAV), named Tsaigumi, in its resolve to enhance its Intelligence, Surveillance and Reconnaissance capabilities. Meanwhile, plans are already underway to mass produce the Tsaigumi UAV as well as develop the nation’s first indigenous Unmanned Combat Aerial Vehicle, which would be in the league of the CH-3A RPA.
OLATOKUNBO ADESANYA
Air Vice Marshal
Director of Public Relations and Information
Nigerian Air Force