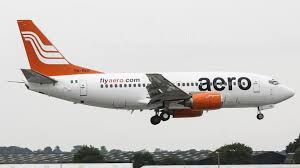 Aero Flight Makes Emergency Landing, Abandons Passengers at the Airport
A Boeing 737/500 flight from Sokoto to Abuja at about 1:45pm on Wednesday 14th March, 2018 has made an emergency landing back in Sokoto due to problems allegedly associated with the landing gear.
One of the Passengers, Ismail Sani told PRNigeria in Sokoto that the Flight No 128 after half-way in its journey was still not stable, prompting the pilot to announce that the landing gear could not return after series of noise from the engines.
Passenger with the flight later learnt that the noise was as a result of the gear still protruding, just as the pilot announced that for safety reasons, a return would be made back to Sokoto at about 2.30pm.
Malam Sani, who owns Platinum FM Radio in Keffi however disclosed that “the aircraft was still airborne as at the estimated time promised by the pilot at 2:30pm, putting more fears on the passengers and the crew members.
“The aircraft finally touched ground at about 2:45pm, accompanied by 2 fire service vehicles and an ambulance at the Sultan Abubakar 111 Sokoto Airport. We were all asked as Passengers to disembark from the aircraft and wait at the departure lounge for further briefing.
“The Pilot thereafter came to the departure lounge to announce that the engineering team advised him to run a check on the gear and that he did so, but the test failed, urging the passengers to make alternative flight arrangements.”
Though the pilot whose name was not mentioned insisted that it was a minor fault and that to prove otherwise, he was flying the aircraft back to Abuja but without passengers and later did so.
Another passenger, who was on board the flight and does not want his name in print said there the airline did not make another flight arrangement for them. The airline merely refunded their money for the flight tickets.
“They didn’t provide us with any arrangement for second flight. They just refunded our money. There is urgent need for the aviation authorities to be more proactive to ensure all aircraft flown in our space meet the required safety standards and international best practices,” he concluded
However all calls and messages sent to the spokespersons of Federal Airports Authority of Nigeria (FAAN), Henritta Yakubu and Nigerian Civil Aviation Authority (NCAA), Sam Adurogboye for confirmation were not responded to . Similarly, the Asset Management Corporation of Nigeria AMCON that took over the management of Aero Contractors is yet to issue any statement on the incident.
By PRNigeria