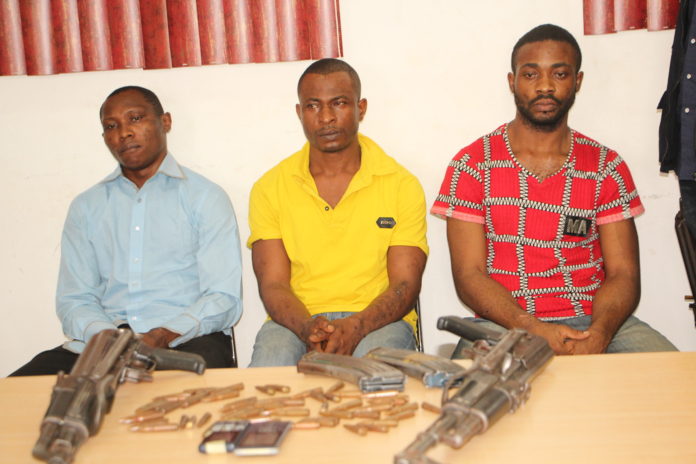 It will be recalled that on 12th December, 2017, some suspected criminals/armed men invaded the Farm House of the Acting Chairman of the Economic and Financial Crimes Commission (EFCC),
Mr Ibrahim Magu at Barkin Uza Karshi Area of Abuja, killing a Police Sergeant (Sgt Haruna Sarki) on guard duty and carted away Two (2) AK47 Rifles belonging to the Police personnel on duty.

2.    Consequent on the aforementioned, the Inspector General of Police, IGP Ibrahim K. Idris, NPM, mni directed the IGP Intelligence Response Team to carry out a discreet investigation into the invasion/attack, arrest and bring perpetrators to justice.

3.    The above mentioned principal suspects were arrested by the Police team in their various criminal hideouts after an unrelenting trail on the perpetrators of the unfortunate incident by the personnel of the IGP Intelligence Response Team and the two (2) Police AK47 rifles carted away from the slain Police sergeant and one other Police personnel on duty were recovered from the possession of a member of the gang in his village home in Otukpo, Benue State.

4.    Inalegwu Omikpa, 36yrs – He is the Gang leader who contacted Lance CPL Vincent Michael (a.k.a Romeo), having received information on the location from one of his gang members, Francis Ochife.

II.    Francis Ochife, 38yrs – confessed to have discovered the location and informed their gang leader Inalegwu Omikpa for them to strike.

III.   Dismissed NAF 12/26972 L/CPL Vincent Michael (aka Romeo) confessed to have recruited two other gang members currently in custody of the Nigerian Air Force. He was handed over to the Police by the Nigerian Air Force after being dismissed for the commission of other crimes.
He also confessed to the criminal role he played in the commission of the crime and led IRT operatives to Otukpo Local Government Area of Benue State where Two (2) AK47 rifles were recovered from him.

5.    They have confessed to the various criminal roles they played in the commission of the crime. Investigation is ongoing to arrest other members of the gang still at large. All suspects would be arraigned in court on completion of investigation.

6.    The renewed commitment of the Nigeria Police Force to guarantee protection of Lives and Property across the country remains unequivocal and unwavering.