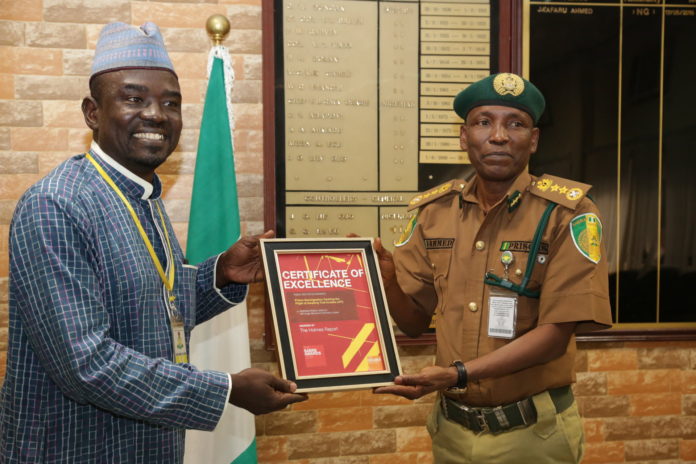 The Nigeria Prison Service(NPS) has said that its capital budget allocation has ballooned from a paltry N4billion in 2015 to N14 billion in 2016 and now N16.6 billion in 2017 which will still be maintained in the 2018 budget.

The Controller General of Prisons(CGP) Mr. Ja’afaru Ahmed disclosed this when he received the Public Education Award and Certificate of Excellence on Public Sector from Superior Achievement in Branding and Engagement (SABRE) in Abuja.

Mr. Ahmed noted that the increase in budgetary allocation for capital expenditure in the last two years was due to intense awareness campaign embarked upon by the service to sensitize stakeholders on the challenges and constraints militating against effective service delivery.

He said that the awareness campaign has also translated to several stakeholders taking interest in releasing inmates from prisons across the country thereby fulfilling the objectives of the campaign, adding that traditional rulers, businessmen and women, judges, Governors and Non-governmental organizations have joined the fray.

He noted that about 245 vehicles were purchased in both 2016 in 2017 respectively which has redressed most of the transportation challenges of the service, stressing that the development would not have been possible without the support of President Muhammadu Buhari and the Minister of Interior, Lt. Gen Abdulrahman Bello Dambazau.

Earlier in his presentation to the CGP and his management team, the Chief Executive Officer of Image Merchants Promotion Limited, Yushau Shuaib who had received the awards on behalf of the Nigerian Prison Service at annual Conference of African Public Relations Association (APRA) in Botswana explained that the campaigns which led to the Award were structured to create massive public awareness for mass mobilization and positive response from the concerned stakeholders who could deploy legal and constitutional procedures to address the challenges of the alarming statistics of Awaiting Trial Inmates(ATI).

He noted that media training, press prison tours and stakeholder’s engagements were some of the campaign execution strategies deployed, adding that tackling the plight of awaiting trial inmates(ATIs) was successful with the reduction of ATIs from 80 percent to 66 percent between January to December 2017.

Image Merchant Promotions Limited(IMPR) consulted and led the media campaign for prison decongestion in Nigeria with the approval of NPS and in collaboration with Centre for Crisis Commission and PRAWA.