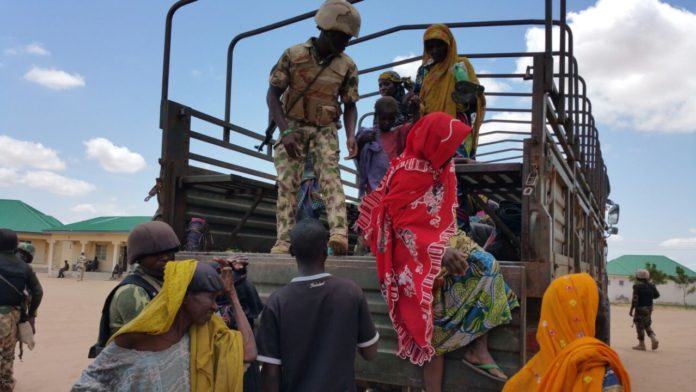 Army Rescues Kidnapped Hostages in Kaduna
1. Troops deployed in operation IDON RAINI on Saturday 9th June 2018 while on clearance patrol along Maganda – Funtua road rescued eight hostages who were earlier kidnapped along Maganda – Sofo Birnin Gwari road.
2. Those rescued include:
a. Three men.
b. Two women.
c. Three children.
3. Items recovered from the bandits include:
a. One red Golf car.
b. One trailer.
c. Two boxes of clothes belonging to one of the passengers.
4. Also, troops on patrol to Nachibi village recovered a motorcycle abandoned by the bandits on sighting the troops.
5. Similarly, troops encountered bandits at Maidaro village where they were rustling some cows.
6. Three members of the vigilante sustained gun shot wounds while one person was killed in action during the encounter.
7. One motorcycle was recovered from the bandits.
8. The general public is once again reminded to be security conscious and report any suspicious movements to the law enforcement agents.
9. You are please requested to disseminate this information to the public.
10. Thank you for your kind cooperation.
TEXAS CHUKWU
Brigadier General
Director Army Public Relations