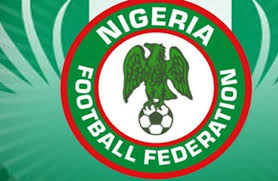 After World Cup: EFCC Probes Members of Nigeria Football Federation
The Economic and Financial Crimes Commision is to investigate and take necessary action against Mr Pinnick Amaju Melvin, Mallam Shehu Dikko and three other top board members of the Nigeria Football Federation.
This follows  a petition it received from a former National team Coach, James Peters on May 4, 2018 with a heading ‘MONUMENTAL STEALING AND FINANCIAL CRIMES IN THE NIGERIA FOOTBALL FEDERATION received by the Executive Chairman of EFCC  on May 4, 2018.
In the petition, Peters who coached National teams and led them to notable victories and also served as Technical Director with the Nigeria Football Federation for many years urged the EFCC to carry out a thorough investigation on an alleged “unprecedented stealing, corrupt practices and financial crimes being perpetrated by the current President Mr Amaju Melvin Pinnick, the General Secretary Dr Mohammed Sanusi, the 1st Vice President Barrister Seyi Akinwumi, the 2nd Vice President Mallam Shehu Dikko and a member of the Executive Committee Alhaji Ahmed Yusuf (AKA Fresh).
The former Technical Director also alleged “stealing and fraudulent activities by FINANCIAL DERIVATIVES LTD, a company cunningly brought into the NFF by President Amaju Pinnick for the sole purpose of warehousing money outside the official accounts of the NFF in the Central Bank and diverting same for fraudulent activities.”
Similarly, the petition stated that “These NFF chieftains have also used the company MEDITERRANEAN SPORTS LIMITED belonging to Mallam Shehu Dikko who is the 2nd Vice President of the Executive Committee, Chairman of the League Management Company, a body saddled with the responsibility of running the Elite league, and  attracts millions of dollars from sponsorships and Chairman, Marketing and Sponsorship sub-committee of the NFF to collect over 40% of revenues from the numerous sponsors of the NFF “.
In a notification letter ref no. EFCC/EC/mos/59/17 written to the Permanent Secretary of the Ministry of Youth and Sports by the Executive Chairman, the EFCC notified the Ministry that it has received a petition from Mr Peters and thereby ‘forward same for investigation and necessary action’.
The Petitioner in the letter,  alleged that despite the Federal government’s policy of Treasury Single Account where monies of  government Parastatals are lodged for purposes of checking leakages etc, Mr Amaju Pinnick and others obtained the services of FINANCIAL DERIVATIVES COMPANY  LTD to warehouse revenue accruing to the NFF from well spirited individuals and Corporate organizations which never got to the NFF . He alleged too that funds made available by corporate sponsors were never disclosed.
Mr Peters called for a Forensic audit to be carried out to look at all approvals and retirements by the mentioned persons.
NNEKA IKEM ANIBEZE
SA MEDIA