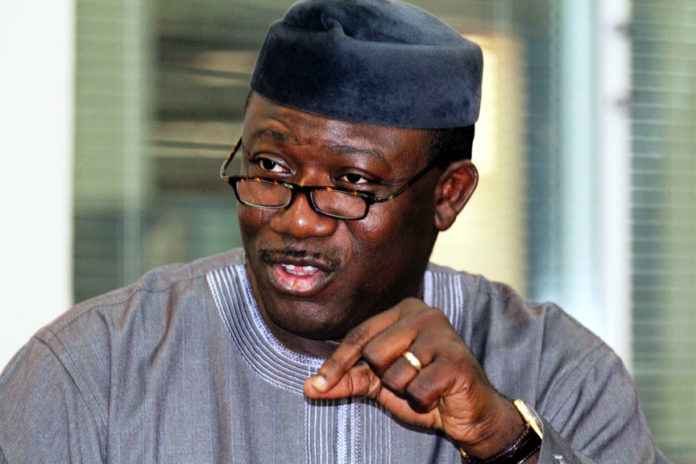 Obasanjo, Saraki Speak on Fayemi’s victory in Ekiti
Former President Olusegun Obasanjo and Senate President Bukola Saraki have congratulated the Governor-elect of Ekiti State, Kayode Fayemi on his victory in the just concluded Ekiti gubernatorial election.
The former President, who said he received news of Mr. Fayemi’s election while on transit to Beijing, China, described the politician’s victory as a huge feat.
He added, “You will agree with me, no doubt, that the outcome of the election broadly reflects the choice of your people, who have, by their conduct, visibly demonstrated that they cherish you and will do their utmost to make you succeed.
“I urge you, therefore, to reciprocate their trust by doing everything you can to strengthen their faith in democracy and in its ability to bring about improved material conditions and better service delivery to them.
“You have fought and won the election and deserve to savour the victory. As you rejoice, however, I would urge that you should be magnanimous in victory and stretch a hand of fellowship to the other candidates who failed in their bid for elected office.
“Such a gesture is not only charitable but should also help at this time to cool passions in the wider interest of Ekiti State in particular and Nigeria at large.
“I felicitate with you, once again, on your renewed mandate and, as you prepare for another four years at the helm of affairs of Ekiti State, I extend best wishes for your good health and the continued progress of Ekiti State under your able leadership.”
In a statement signed by his Special Adviser on Media and Publicity, Yusuph Olaniyonu, Senate President Bukola Saraki stated that Fayemi should use his second-coming to continue the people-centred policies and programmes of his first term.
He urged Fayemi to grow the State’s economy in order to leave behind a sustainable legacy.
The Senate President said the victory was a sign that the people of Ekiti State still have confidence in the former minister’s ability to provide good governance and render efficient service to the state and its people.
He also advised the Governor-elect to maintain his focus on how to bring more development to the State and improve the standard of living of the people.
The Senate President also urged the Independent National Electoral Commission (INEC), the law enforcement and security agencies, the government and entire electorate to learn some lessons from the Ekiti State gubernatorial election, which has served as a fore-runner to the 2019 General Elections and ensure that all areas of complaints and inadequacies are corrected before a similar election in Osun State and the 2019 general elections.
He said, “To ensure that the Nigeria people have continued trust and faith in our electoral system, we must continue to work to improve our electoral policies and practices. We must look into the issues that have been identified in this last election to ensure that they are not repeated in the upcoming Osun Gubernatorial election, and during the 2019 elections. Definitely, the 2019 elections must be better in all ramifications than the 2015 polls.”
Saraki prayed that God will bless and guide the Governor-elect as he prepares to assume office, and called for a smooth transition between the outgoing government and the incoming one.
By PRNigeria