The remains of the late Former Chief of Defence Staff(CDS) Alex Badeh was laid to rest at the military cemetery in Abuja with the Secretary to the Government of the Federation(SGF) Boss Mustapha leading the federal government delegation to perform the solemn ceremony.

Boss Mustapha was followed by representatives of the Minister of Defence, Nuratu Batagarawa, Permanent Secretary in the ministry; Chief of Defence Staff, Abayomi Olonisakin; and Chief of Army Staff, Tukur Buratai. 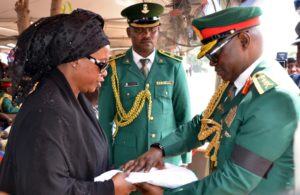 In their respective speeches at the occasion they eulogized the former CDS for his selfless service to the nation, stressing that his commitment to the fight against insurgency was unwavering.

The remains of the 15th Chief of Defence Staff (CDS), Alex Badeh, were on Wednesday lowered into the grave at the National Military Cemetery in Abuja.

The ex-CDS, an Air Chief Marshal who served under former president Goodluck Jonathan, was shot dead by unidentified gunmen on the Keffi-Abuja Expressway on December 18, 2018, when he was returning from his farm.

Badeh’s remains were committed to mother earth after a prayer offered by D.B. Gani, a Group-Captain and the Director of the Air Force Chaplaincy, followed by the laying of wreaths at his grave.

In his funeral oration Gani emphasized on the nothingness of life, as he believes that, no matter the status or peak of attainment of an individual in his chosen career in life, it is all nothing but a borrowed life.

“Some few years ago, Oga Badeh was Chief of Defence Staff. Today, he is no more there, yet the respect is there. He rose to become a very important figure in this nation. But do you know what? Everything is a borrowed life.

The ceremony was rounded off with a 21-gun salute in honour of the late CDS, who was also the 18th Chief of Air Staff.

Thereafter, he proceeded to the Nigerian Defence Academy (NDA) in 1977 as a member of the 21 Regular Course and was commissioned as a pilot officer on July 3, 1979.

He attended both the junior and senior staff courses, rose through the ranks and was appointed the Chief of Air Staff on October 4, 2012.

On January 16, 2014, he was appointed the 15th Chief of Defence by ex-President Jonathan.

He is survived by his wife, two sons, and a daughter.

Dignitaries at the occasion included the governors of Adamawa and Plateau, Umar Jibrilla and Simon Lalong; Deputy Governor of Bayelsa, John Jonah; and Deputy Speaker of Adamawa House of Assembly.

Others were Oluseyi Petirin, a former CDS and former Chief of Army Staff, Azubuike Ihejirika.