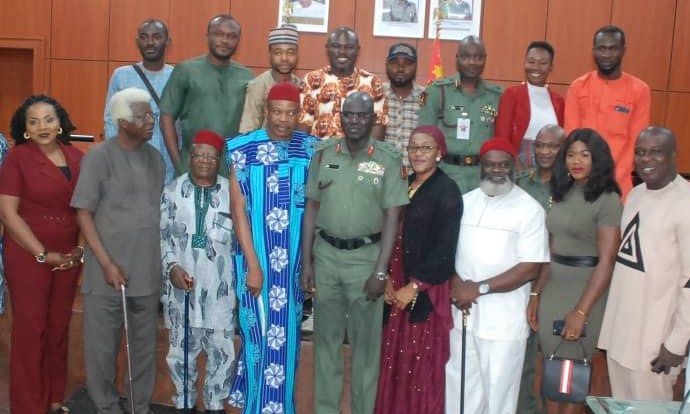 The Chief of Army Staff (COAS), Lieutenant General Tukur Yusuf Buratai, has urged film actors and actresses in both Nollywood, Kannywood and other film industries to complement and help boost the efforts of Nigerian Army in the counter-insurgency war, and other strategic military operations aimed at containing violent crimes across the country.

This, Buratai, said can be achieved through the production of movies and entertaining jingles that sensitize the general public about the ills of engaging in terrorism and other criminal activities, while also enlightening teeming citizens about the Army’s strides in tackling diverse security problems plaguing the nation.

The COAS, spoke while hosting a delegation of the Nigerian Guild of Actors led by its Acting President, Mr. Steve Eeboh, at the Army Headquarters, in Abuja.

Lt. Gen. Buratai, applauded the efforts of the eminent actors, actresses and the Nollywood industry in general for the massive jobs it has created for many unemployed youths in the country, saying: “The great works you have been doing has not gone unnoticed. And I must say that, it is because of your dedication to nation-building, economy growth and selfless service to humanity that you are succeeding in what you are passionately doing.”

He pledged to partner the Guild of Actors in order to project the image of the country, saying the Nigerian Military and Army in particular, will not relent in its bid to rid the country of unscrupulous, retrogressive and terrorist elements, whose ‘evil activities’ constitute a threat to national peace and harmony.

Buratai, while speaking further, granted the Actors Guild delegation’s request for a ‘Novelty Match’ at a scheduled date, and also invited them to participate in the Army and other Security Agencies’ Half-Marathon race at the Aguiyi Ironsi Cantonment and other sporting and entertaining activities.

Mr. Steve, in a speech during the courtesy call, commended the COAS for the professional leadership qualities he has exhibited since his appointment, which has driven the Army to an enviable height.

He said the essence of their visit is to foster a mutual and beneficial relationship with the Army, so as to get Army’s maximum protection for their members who engage in film productions in volatile areas across the country, especially the North-East.

“As cultural and brand ambassadors, I want to assure you that our members are very available for some of your advocacy programmes by producing drama clips to support your public environment campaign drive to aid the accomplishment of your set objectives.

“We have also agreed to produce a documentary and jingles featuring our veterans, just to showcase to the world the combat achievements of the Nigerian Army and laudable efforts of the troops to safeguard our territorial integrity,” he stated.