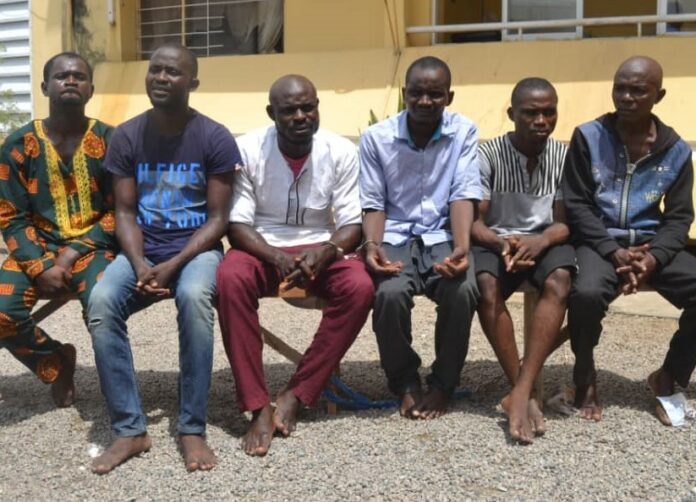 In furtherance with the ongoing operation by the FCT Police Command to curb the menace of one chance robbery/419 in the Federal Capital Territory, on 31st May, 2019 at 0930hrs Operatives of the Command Anti-One Chance Unit following a tip off arrested one Osita Chukwuemeka Orotu ‘m’ 28 years, a notorious one chance robber, at his hide in Angwan Cement Kado. Until his arrest, the suspect was on the Command’s watch list for his nefarious activities. Effort is being intensified to arrest his cohorts.

2. Similarly, on 13th June, 2019 at about 1400hrs police detectives acting on a complaint arrested two notorious fraudsters (419ners), one Uche Ugbabor and Emeka Okafor, at their hideout in Shagari quarters Deidei. The suspects who pose as stranded foreign nationals to lure and defrauding their victims, belong to a notorious 419 gang that has been terrorising unsuspecting persons around Kubwa/Deidei axis. Effort is being intensified to arrest their cohorts who are now at large.

3. In another operation, on 15th June, 2019 police operatives from the Anti-One Chance unit acting on tip off, carried out raid at some notorious 419/one chance robbery meeting points located at Ungwan Shehu and Ungwan Cement in Karimo. The raid led to the arrest of one Uche Johnson Eze ‘m’ 38yrs, Ekechukwu Eze ‘m’ 27yrs, Solomon Ifeanyi ‘m’ 31yrs, Onome Emele ‘m’ 33yrs all of Ungwan Shehu Karimo and one Sunday Agbom ‘m’ 32yrs of Giri, Gwagwalada. Also, arrested is one John Idehi ‘m’ 48 years, a member of the one chance/419 syndicate, who poses as a native doctor (babalawo) and custodian of the concoctions purportedly use for doubling money for their unsuspecting victims. One black KIA with registration no ABC 569 HA used by the suspects for their operation has been recovered as exhibit. All suspects will be arraigned in court when investigations are concluded. The raid at one chance robbers/fraudsters (419) hideouts is an ongoing exercise.

4. The Command enjoins members of the public to complement its effort by being security conscious, vigilant; and should avoid using unpainted taxis.

5. Similarly, the Command wishes to assure members of the public that it has beefed up security around Central Area and all identified black spots.