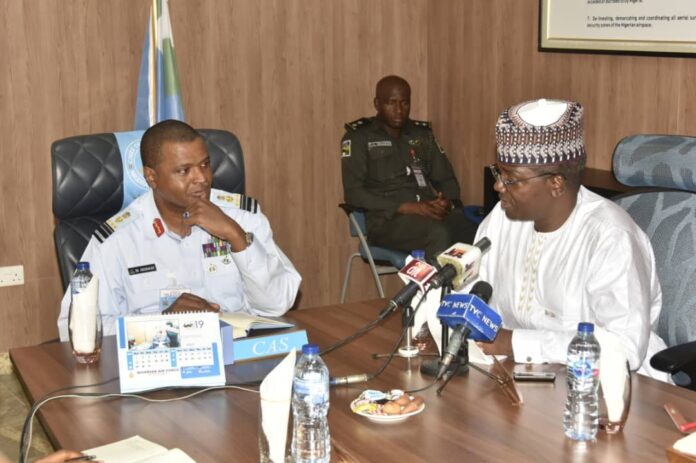 The Executive Governor of Zamfara State, His Excellency, Doctor Bello Matawale, has commended the Nigerian Air Force (NAF) for the role it played in helping to force the armed bandits, who were terrorizing innocent people in Zamfara State to the negotiating table. He noted that the pressure mounted on the criminals by the NAF, through air and ground assaults, in conjunction with other security agencies, for the first time in more than 4 years, was able to halt attacks on villages thereby bringing relative calm to the State. The Governor gave this commendation while on a courtesy visit to the Chief of the Air Staff (CAS), Air Marshal Sadique Abubakar, at Headquarters NAF (HQ NAF) today, 18 July 2019.

The Governor, who noted that it had been over 3 weeks since an attack was recorded in the State, explained that the decision to negotiate with the bandits was born out of the need to immediately end all forms of insecurity in the state so that the people of Zamfara can go about their normal activities without fear. According to him, “markets, which were hitherto closed for several years, have since been reopened and several captives have regained their freedom”. While thanking the leadership of the NAF and its personnel for their immense contributions to the gradual restoration of normalcy to the State, the Governor pleaded for additional support in the areas of community development and provision of healthcare services to help alleviate the shortfall in amenities caused by many years of banditry attacks.

In his response, the CAS congratulated the Governor for his efforts in bringing peace to the state while promising that the NAF would continue to support the Zamfara State peace initiative. Accordingly, he said the NAF would sustain its Intelligence, Surveillance and Reconnaissance missions across Zamfara and surrounding States to deter attacks. He added that the establishment of the 207 Quick Response Wing (207 QRG) Gusau, with its helipads and fuel facilities, had not only added impetus to air operations but also improved the conduct of ground operations with the 250 NAF Special Forces (SF) operating in Gusau and Bungudu Local Government Areas (LGAs). He noted that the ultimate aim was to have a minimum of 700 Regiment/SF personnel in Zamfara to compliment the efforts of other security agencies.

Speaking further, Air Marshal Abubakar said the establishment of a NAF Detachment in Birnin Gwari in Kaduna State had also further enhanced the ability of the NAF to effectively conduct air operations in the area. He remarked that the 2 newly acquired Augusta 109 Power Helicopters, which were inducted by the Vice President Yemi Oshinbajo during the recently concluded NAF Day Celebration, would soon be deployed to the Northwest. He noted further that the Service had been working with the previous State Administration towards the construction of a new runway in Gusau to enable fixed wing aircraft operate from the State. The CAS recalled that the NAF had conducted a 5-day medical outreach in Shinkafi in August 2018 and had concluded plans to conduct medical outreaches in some other LGAs in the State. He however solicited for the continued cooperation of the people and Government of State in the provision of intelligence to enable the effective and efficient conduct operations.

Air Chief Tours NAF Investment Company
The Chief of the Air Staff (CAS), Air Marshal Sadique Abubakar, undertook a tour of the Nigerian Air Force Investment Limited (NAFIL) Tailoring Workshop in the Nigerian Air Force (NAF) Base Kaduna for an on-the-spot assessment of facilities to ensure full compliance with the Federal Government’s directive for the Armed Forces of Nigeria (AFN) and other security agencies to patronise the Nigerian Cotton, Textile and Garment (CTG) Industry Sector. While in Kaduna, the CAS also immortalized 2 of NAF’s fallen heroes, Air Commodore Gabriel Ochai, who died during a test flight in Kaduna, and Flight Lieutenant Kalto Kilofas, who was among the crew of the Mi-35M Helicopter that crashed in Damasak, Borno State, by naming 2 newly constructed residential accommodations after them. Four new 3-bedroom bungalows for married officers were named after Air Commodore Ochai, while a block of single-room transit accommodation for single officers was named after Flight Lieutenant Kilyofas.

Conducting the CAS on the tour of facilities at the Tailoring Workshop, the Managing Director (MD) NAFIL, Air Commodore Uchechi Nwangwu, stated that the Workshop, which was established in June 2017, has a staff strength of 68, comprising 38 NAF personnel and 30 civilians, who are dependents of personnel from the Base that were trained in the facility. He said the Workshop had so far produced over 62,000 pairs of uniforms for the NAF and was in the process of completing the production of another 17,900. The MD further noted that, as part of its efforts to meet the requirements for full compliance with the FG’s directive, the Workshop, which was certified by the Federal Ministry of Labour and Productivity as a Trade Test Centre in September 2018, had acquired 34 additional high-end industrial machines bringing its inventory of machines and equipment
to 140. He said this had raised the Workshop’s optimal production capacity from 5,000 to 6,500 uniforms per month. He also mentioned that 4 of the tailors were recently trained in advanced tailoring techniques in China after their initial training by NAF Technical Partners in Aba, Abia State.

At the end of the tour, the CAS expressed satisfaction with NAFIL’s efforts as well as the immense progress made towards ensuring total self-reliance in terms of uniforms production. He said the Workshop could now go beyond sewing regular uniforms to the production of flying and technicians suits as well as other uniform items and accoutrements. Air Marshal Abubakar stated that NAF tailoring services would be further expanded by opening 2 other centres in Makurdi and Lagos to meet the requirements of the Service.

Speaking while commissioning the new residential accommodations, the CAS disclosed that, in his quest to have a professional force, he had taken steps to emplace the right structure, right human capacity, right equipment holding and, more importantly, the right welfare incentives to ensure personnel are properly motivated for effective service delivery. He said, in his view, the human being is the most critical factor in any working system. Accordingly, the current NAF leadership had focused its attention on the provision of befitting accommodation as well as provision of good healthcare and educational facilities for personnel and their families. He said the NAF had therefore established new Reference Hospitals in Bauchi and Daura while the medical centre in Port Harcourt had also been upgraded to a Reference Hospital. Air Marshal Abubakar also noted that the Service had upgraded medical equipment at its various medical centres around the country. In terms of education facilities, he said the NAF has renovated/remodeled and constructed new blocks of classrooms and hostel accommodations in existing NAF schools while establishing 2 new secondary schools. These are the Air Force Girls Comprehensive School Abuja and the Air Force Secondary School (AFSS) Shasha, Lagos. He equally expressed delight that AFSS Kaduna, which was upgraded to a boarding school and renamed Air Force Comprehensive School Kaduna, was also doing well. He remarked that, through massive construction of residential accommodation, the Service had been able to raise accommodation sufficiency from 35 to about 72 per cent, despite almost doubling the strength of its personnel in the last 4 years. He said the NAF would sustain its efforts to ensure that every single personnel is comfortably accommodated. The CAS concluded by commending the efforts of the Air Officer Commanding Air Training Command (AOC ATC) and the Commander 435 Base Services Group (435 BSG) for their contributions towards ensuring security in Kaduna State.

The Commander 453 BSG, Air Commodore Idi Sani, while delivering his welcome address, stated that the commissioning was a remarkable milestone by the current NAF administration towards improving the welfare of personnel. He remarked that the number of residential accommodation provided in NAF Base Kaduna in the last 4 years was unprecedented. He therefore pledged the commitment of personnel of the Base to reciprocate the exceptional gesture through unwavering dedication to duty, whilst upholding a high maintenance culture. The Chief of Administration Headquarters NAF, Commandant of Armed Forces Command and Staff College Jaji, AOC ATC, Commandants and Commanders of co-located NAF Units as well as members of Nigerian Air Force Officers’ Wives Association and Airmen Wives Association graced the occasion.