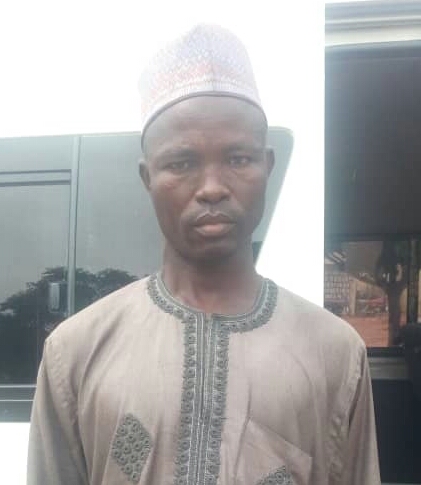 The Gombe Zonal office of the Economic and Financial Crimes Commission, EFCC, on Monday, July 29, 2019, secured the conviction of a visa fraudster, Malam Lauwali Usman, before Justice Abubakar Jauro, of the Gombe State High Court, on a one count charge bordering on fraud.

Usman was convicted after pleading guilty to the one count charge.

His journey to jail started before the 2019 general elections when he invited some people asking them to submit their international passports for the lesser Hajj to Saudi Arabia.

The purpose for the lesser Hajj, according to him, was to take them to Saudi Arabia to offer prayers in favour of a political party and its candidates on contractual basis.

The victims explained that after collecting the money, the convict called them few days after and told them that the person conveying their passports to Kano State for visa processing was involved in ghastly motor accident and that all the passports were burnt, adding that they were going to pay another N23, 000 (Twenty Three Thousand Naira), each for the replacement.

Sensing foul play, the petitioners contacted the EFCC and the convict was arrested on January 2019, at Tashan Bauchi area, within the Gombe Metropolitan City. He was arrested at the point of collecting money from one of the victims.

A search warrant executed in the suspect’s house showed all the international passports of the victims and other incriminating items in his possession, which were recovered from him by the EFCC operatives.

The count reads: “That you, Mallam Lauwali Usman, sometimes in January 2019, or thereabout in Gombe, Gombe State, within the jurisdiction of this Honourable Court, did with intent to defraud Sani Ahmed Elwan, Zaidu Muhammed Awwal, Muhammed Shuaibu and Mallam Umar Muhammed to deliver to you monies totalling N92,000 to procure for them international passports for the purpose of performing lesser pilgrimage to Saudi Arabia, which you never did and thereby committed an offence contrary to Section 320 and Punishable under Section 322 of the Penal Code Law”.

When the charge was read to him, Lauwali pleaded ‘guilty’.

In view of the guilty plea, prosecution counsel, S.M Aliyu, argued that the convicted should be convicted and sentenced as charged.

The Judge also gave an option of fine to the tune of N50, 000, (Fifty Thousand Naira), and ruled that the convict should restitute the total sum to the victim.