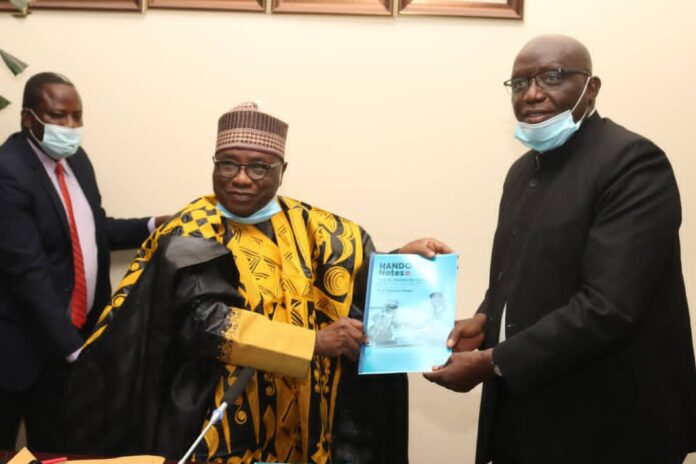 In a brief handover ceremony held at the university’s headquarters in Abuja, Peters, who was elected the Vice-Chancellor on December 3, 2020, described his predecessor as a man whose tenure would always be reckoned with in the annals of the university.

In a brief acceptance speech, Peters, a Professor of Chemistry, said, “Professor Adamu’s tenure will be enduring and we shall have cause to make reference now and then to the tenure of Abdalla Uba Adamu.

“It has been a wonderful journey for Professor Abdalla, and it has ended in a very remarkable way. I want to thank God for him and all he has done for NOUN.”

Earlier in his farewell remarks, Adamu had thanked the Almighty God who entrusted him with the leadership of the university and the ability to see-off the tenure successfully.

He described the past five years as “extremely intense” which nevertheless allowed him the opportunity to contribute towards “widening access to higher mass education for the people of Nigeria.”

Adamu added: “I leave NOUN with fond memories of five years of a chunk of my life. In these five years, I have been in situations where I have thought ‘it is really special that I am getting to experience this.’

“These situations, of challenge and requiring fortitude, represented what I have truly appreciated about the job. These defining moments included processes that gave the university its soul.”

Adamu, a double professor of Science Education and Media and Cultural Communication, said his tenure has recorded some listless achievements that improved on the image of the university and thanked the Pro-Chancellor, Prof. Peter Okebukola, and the principal officers, whom he described as his “Dream Team” that supported him in discharging the responsibility.

“I believe I leave the university well-positioned to meet the opportunities and challenges of being a national and international leader in African and global Open and Distance Learning in the 21st Century,” he added.

The ceremony, at which the immediate past VC handed over the leadership baton to his successor, was witnessed by the principal officers, deans, directors and staff of the university, as well as well-wishers.