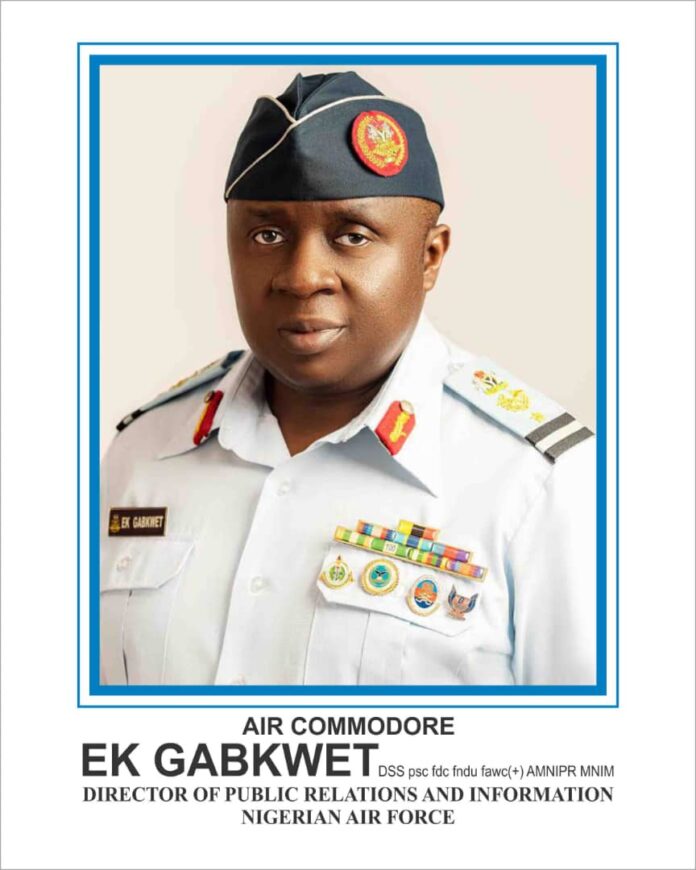 2. Gabkwet was commissioned into the NAF as a Pilot Officer on 16 August 1996. He is an alumnus of the Nigerian Institute of Journalism, Ogba Lagos State, where he obtained a Post Graduate Diploma in Public Relations in 2008. The senior officer has attended several courses some of which include, International Military Public Relations Course in Sweden, Junior and Senior Command and Staff Courses at the prestigious Armed Forces Command and Staff College, Jaji as well as Strategic Public Relations and Crisis Management Courses at Pinnacle PR, London. Additionally, he attended a Speech Writing Course organized by Ragan Communications at American University, Washington DC. Air Commodore Gabkwet is also an alumnus of the National Defence University, Champing, China, Air Force War College, Nigeria and the National Defence College, Nigeria.

3. The senior officer has held several appointments in the course of his military career. He was the Group Public Relations Officer at Air Weapon School (Now 407Air Combat Training Group), Kainji and at various times served as the Command Public Relations Officer at Tactical Air Command Makurdi, Training Command, (Now Air Training Command), Kaduna as well as Logistics Command, Lagos. The new Spokesperson was also a United Nations Military Observer at the Democratic Republic of Congo between 2004 and 2005 where he also acted as the Assistant Military Spokesman. He served as the first Press Officer to the Chief of the Air Staff between 2010 – 2012. Other appointments held by the senior officer include the Deputy Defence Attaché (Air), Embassy of Nigeria, Beijing China between 2013 – 2016 and Command Training Officer at the Ground Training Command Enugu in 2018. Until his appointment, he was a member of Directing Staff and Director of Coordination at the Air Force War College, Makurdi. Air Commodore Edward Gabkwet is an Associate Member of the Nigerian Institute of Public Relations and a Member of the Nigerian Institute of Management.

4. The senior officer is decorated with the Distinguished Service Star, Fellow Defence College, Fellow National Defence University, Fellow Air War College (+) and the United Nations Medal among others. He is married to Mrs Patricia Jemcit Gabkwet and the union is blessed with 3 children. He enjoys playing golf and badminton as well as watching documentaries.

for Director of Public
Relations & Information