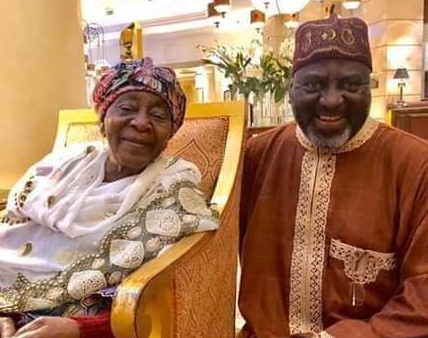 The National President of the Ilorin Emirate Descendants Progressive Union (IEDPU),Alhaji Aliyu Otta Uthman, fsi,on Friday (April 30,2021) paid a condolence visit to Kano to the Emir of Kano, Alhaji Aminu Ado Bayero; and the Emir of Bichi,Alhaji Nasiru Ado Bayero,on the recent death of their illustrious mother,Hajiya Maryam Ado Bayero,as he described the deceased as “an unforgettable illustrious daughter of Ilorin Emirate”.

Alhaji Uthman,who was received by the Emir of Bichi, Alhaji Nasiru Ado Bayero,at his Sabin Kofa Palace in the commercial city, said that he and his entourage were in Kano to physically register the Union’s condolences on behalf of the good people of Ilorin Emirate, who he said,felt extremely sad on the death of the Queen mother.

He added that the Union was particularly depressed by the death of Hajiya Ado Bayero because of the exemplary pious life she lived and the important roles she played in the promotion of friendship and cooperation between Kano and Ilorin Emirates during her life time.

Alhaji Uthman,who also presented the condolence letters addressed to the two Emirs by the Union and signed the condolence register, recalled the wonderful maternal supports Hajiya Ado Bayero afforded the Kano Branch of the Union as she was quite supportive of all the activities of the Branch from the early 1960s to her passage.

Receiving the IEDPU National President, the Emir of Bichi, Alhaji Nasiru Ado Bayero, thanked the Union and the entire people of Ilorin Emirate for the indescribable outpourings of positive emotions on the death of their mother. He explained that the Emir of Kano was not available to receive the Union because he had an urgent state assignment in Abuja on that same date and time.

Alhaji Ado Bayero said that he and his brother,the Emir of Kano,Alhaji Aminu Ado Bayero, and the entire people of Kano State felt encouraged and satisfied with the colourful presence of the Governor of Kwara State, Mallam AbdulRahman AbdulRazaq; the Emir of Ilorin, Alhaji(Dr) Ibrahim Sulu-Gambari, CFR; and the Chief of Staff to the President, Prof.Ibrahim Agboola Gambari,CFR; at the burial of their mother as he said that there could never be a greater show of solidarity, adding that the IEDPU President’s visit has further raised their feelings of sense of belonging to their maternal home.

The National President and his entourage were later taken to the tomb of the departed Queen Mother where prayers were held for the further repose of her gentle soul soul.

The late Hajiya Maryam Ado Bayero,who died on Saturday (April 24,2021) in Cairo,Egypt, was a princess of Ilorin whose father was Shaykh Abdulkadir Shuaib Bawa,who reigned between 1919 and 1959 and was the longest serving Emir of Ilorin. She was also an aunt to the Emir of Ilorin, Alhaji (Dr) Ibrahim Sulu-Gambari, CFR,and a widow to the penultimate and longest serving Emir of Kano,Alhaji Ado Bayero,CFR, and mother to the incumbent Emir of Kano, Alhaji Aminu Ado Bayero, and Alhaji Nasiru Ado Bayero. among other accomplished.

The President and his entourage from the Union’s National Executive Council are expected back to Ilorin today.