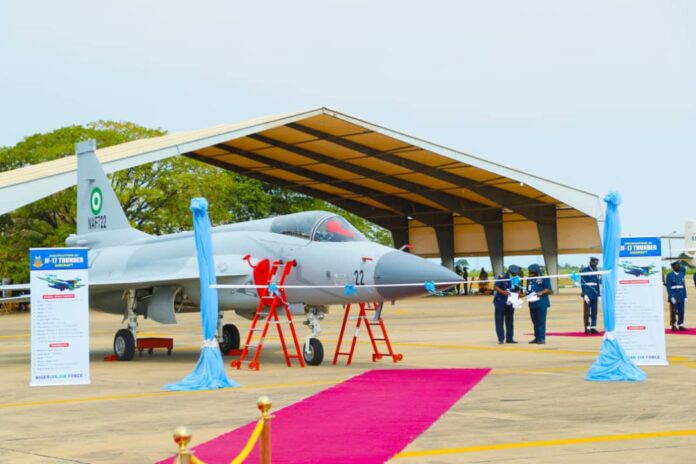 The Nigerian Air Force (NAF) Day Celebration 2021 has ended in Makurdi, Benue State with the induction of 3 newly acquired JF-17 multi-role Thunder aircraft into its inventory. The induction ceremony, which took place today 20 May 2021, was performed by the President and Commander-in-Chief (C-in-C) of the Armed Forces, President Muhammadu Buhari who was represented by the Honourable Minister of Defence (HMOD), Major General Bashir Magashi (Rtd). At the historic occasion, the President stated that the induction ceremony was personally rewarding to him as it marked yet another step in his promise to improve the infrastructure and equipment dispositions of the Armed Forces of Nigeria (AFN) and other security agencies for enhanced output, professionalism and service delivery. He also added that the induction of the JF-17 aircraft is indicative of how the NAF has continued to advance it capability and capacity over the past 57 years, while developing competencies to achieve its constitutional mandate of defending the Nation’s territorial integrity by air.

The President specially commended the Chief of Air Staff (CAS), Air Marshal Oladayo Amao, for not only remaining at the forefront of the fight against all enemies of Nigeria but also for his numerous initiatives towards bridging NAF human capacity gaps as well as exploiting Research and Development (R&D) for improved self-reliance. The President went further to commend the resilience and commitment of members of the AFN and other security agencies for ensuring the sovereignty of Nigeria and its indivisibility. He also appreciated the support of the Government of Pakistan and the efforts of the Pakistan Ambassador to Nigeria, His Excellency Mohammad Tayyab Azam, at sustaining the strategic partnership between Nigeria and Pakistan while assuring that his Administration would continue to work with members of the international community in order to collectively evolve solutions to the common challenges of terrorism and proliferation of small arms and light weapons. The President also used the occasion to salute the gallantry of personnel who have paid the supreme price in the defence of the Nation while also praying for the repose of their souls.

In his address, the CAS stated that the induction of the newly acquired JF-17 multi-role Thunder aircraft marks the climax of the NAF 57th Anniversary Celebration. This, he said, was yet another milestone of the President Mohammed Buhari-led administration’s unwavering resolve to equip and energize the NAF and indeed the entire AFN towards combating terrorism, insurgency, armed banditry and other threats. Air Marshal Amao also revealed that under President Muhammadu Buhari, the NAF has inducted 23 brand new aircraft into its inventory, comprising 10 Super Mushshak trainer aircraft and 13 rotary wing combat platforms and 5 Mi-35M helicopter gunships. Others are 4 Agusta 109 Power helicopters, 2 Mi-171E and 2 Bell 412 multi-role helicopters. The CAS added that, the induction of the 3 JF-17 Thunder aircraft thus brings the total number of newly inducted aircraft in the last 6 years to 26. The CAS went further to state that, “These aircraft have significantly boosted our operational effectiveness in the fight to defeat all threats to the Nation and its citizenry.’’ He also added that, “Through synergy with surface forces, the freedom of action of the insurgents/terrorists in the North East has been effectively curtailed. Consequently, NAF combat and combat support operations, energized by our up-scaled Order of Battle, have contributed to improving the security situation in the North East, whilst also contributing significantly to dealing with threats in the North West, North Central and other parts of the Country.” Speaking further, the CAS disclosed that the NAF is expecting 20 additional platforms, comprising 12 A-29 Super Tucano aircraft from the United States of America and 8 Unmanned Aerial Vehicles (UAVs) that would arrive Nigeria in no distant time. These additional aircraft, according to the CAS, will no doubt inject significant impetus into the NAF’s airpower employment capability in support of joint operations. He added that through the immense support of the Federal Government, the NAF has been able to train 133 new pilots during the period to effectively man the new platforms as well as others being expected. The CAS therefore expressed his deepest appreciation to the C-in-C, for his untiring support towards meeting the operational, logistics and welfare needs of the NAF.

Prior to the induction of the JF-17 aircraft, a Seminar was held at the NAF Officers’ Mess, Makurdi on 19 May 2021 where series of lectures were delivered. Some of the topics featured during the Seminar included “Doctrinal Development and Joint Force Employment: An Appraisal of NAF Operations” and “Standardization of Training and Interoperability of Equipment in the AFN: An Appraisal”. The lectures pooled the intellectual minds of experienced serving and retired senior officers from the Armed Forces, other security agencies and members of the National Assembly who discussed ways of improving synergy and joint operations between air and surface forces.