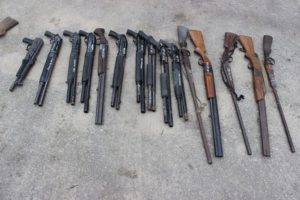 Eight suspected kidnappers and three armed robbery suspects were killed in a shoot-out with men of Rivers State Police Command in the last two weeks, Mr Musa Kimo, the Commissioner of Police, has said
Kimo, who made the disclosure at a news conference on Tuesday in Port Harcourt, the state capital, said that six armed robbery suspects were arrested in the state.
He said that during the period, seven suspected kidnappers were arrested while six kidnapped persons were safely rescued.
He added that six suspected cultists were arrested and 32 firearms were recovered from various criminal gangs during the period under review.
The commissioner said the firearms included three AK-47 rifles, 11 pump-action guns, 10 locally-made pistols, three double-barrel guns and three single-barrel guns.
He said that 101 assorted ammunition and nine vehicles were also recovered from the gangs.
Kimo said nine suspected stolen vehicles were recovered  including BMW X5 Jeep, Toyota Lexus saloon, Toyota Corolla, Nissan Xterra Jeep, among others.
He attributed the achievements to proactive measures and professionalism displayed by officers and men of the command.
He warned criminals in the state to desist from their act or be prepared to face the wrath of the law.
DSP. Ahmad K. Muhammad is the Police Public Relations Officer of the Rivers State Police Command