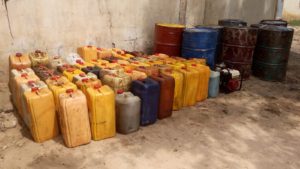 Following a tip off by well meaning citizens, troops of 3 Division yesterday swooped over and dismantled a Boko Haram fuel dump located at Ladu Dumbawa ward, Guzamala Local Government Area of Borno State.
It would be recalled that suspected Boko Haram terrorists had abducted 7 persons in Gajabere and took them to the same location. Those kidnapped were 3 local wards heads called “Lawani” and their respective deputies, as well as the Chief Imam of the town.
However, through sheer guts and bravery, 3 of them escaped and reported the matter to the security which led to the rescue of the rest and discovery of the well concealed terrorists fuel depot which was also destroyed by troops.
The troops have further blocked the terrorists supply route that led to Babangida in Tarmuwa Local Government Area of Yobe State  where they mostly get the supplies.
Troops are intensifying efforts to identify and neutralise all Boko Haram logistic bases to further constrict the terrorists and hasten their total defeat. Citizens are please requested to furnish the military and security agencies with information on all known terrorsists location, routes, suppliers of fuel, food, clothing and any good or service to the terrorists.
Kindly disseminate this information to the public through your medium.
Thank you for your usual cooperation.
Colonel Sani Kukasheka UsmanActing Director Army Public Relations