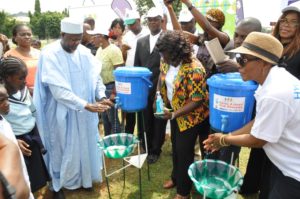 In an effort to prevent transmission of pathogens that cause diseases to human beings, Federal Ministry of Water Resources has urged the general public to embrace the habit of hand washing with soap and water especially at critical times to be free from diseases.
The Permanent Secretary of the Ministry, Mr. Musa Istifanus represented by the Director, Planning Research and Statistics, Mr. Adamu Wakil made this known on Thursday 15thOctober, 2015 during the 2015 Global Hand Washing Day commemoration at Community Staff School Asokoro, Abuja.
Mr. Istifanus said “Today we join the rest of the International Community to commemorate hand washing day. This singular activity of hand washing intend to demonstrate the importance of hygiene to break the chain of faeca-oral diseases transmission, which in turn reduce to barest minimum morbidity and mortality among adults and children particularly those below ages of five”
According to him, “hand washing with soap or ash under running water is life –saving intervention, the single most cost effective health intervention and cornerstone of public health”.
He called on the students and pupils at the event to become hand washing champion/ ambassadors by carrying the message to their families at home. He explained that the commemoration was aimed at motivating children to embrace and share proper hand washing practice .This would place the children as hand washing champions at the heart of national and local initiatives.
In her remark, the Water, Sanitation and Hygiene, Ambassador (WASH) Engineer. Ebele Okeke said Global Hand Washing Day is a campaign motivated to mobilize millions of people around the World to wash their hands with soap and water on a regular basis.
“ Hand washing with soap and water at critical times- before eating or preparing food, after a hand shake, when back from work and school , and after using the toilet reduces diarrheal incidents among children under five years of age and adults by almost 50% and also reduces the incidence of acute respiratory infections by around 23 %” Engineer Okeke explained.
She said hand washing also  prevent the spread of infectious diseases such as hepatitis, typhoid fever, polio, cholera, and the deadly ebola virus that was experienced last year in Nigeria.
Musa Mato
For: Director Press, FMWR