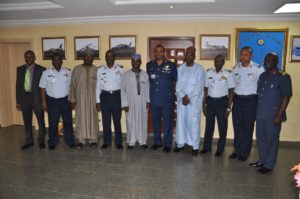 The Nigerian Air Force has reiterated the military determination to defeating Boko Haram as normalcy is gradually returning to the North East consequence upon the achievements being recorded against the Boko Haram terrorist group. This  assertion  was made by the kaChief of Air Staff, Nigerian Air Force, Air Marshal Sadique Abubar when the Director General, National Emergency Management Agency (DG-NEMA), Alhaji Sani Sidi paid him a courtesy call in his office.
Air Marshal Abubakar said the Nigerian Air Force has renewed its air operations and re-strategized to make the Service more effective in the conduct of its operations in the battlefield. The CAS said that whether in support of the Army or while acting singly, the NAF has made tremendous gains in ensuring that the terrorists are degraded and no longer able to move freely within the theater of operations. Air Marshal Abubakar said the effect of the successes has further reassured the citizens who have started returning back to their villages.
He assured that the December deadline set by the Federal Government to end the insurgency in the country would be achieved. The Air Chief further stated that the NAF was committed to supporting NEMA in taking care of the internally displaced persons (IDPs) in the various camps throughout the North East. He said the Air Force had already provided a level two hospital at the Dalori camp with over 34 highly specialized medical personnel.
Earlier in his remarks, the DG-NEMA, Alhaji Sani Sidi, said that he was at the Air Force Headquarters to solicit for more support and cooperation from the NAF in the discharge of the Agency’s responsibilities of managing and coordinating disaster in Nigeria. He said NEMA was struggling with the task of managing over 2.1million IDPs in conjunction with the International Organisation for Migration and support from other donor agencies. He said NEMA was moving to the stage of rehabilitation and reconstruction in collaboration with other agencies of government as normalcy gradually returns to the area. Alhaji Sidi further said that many of the IDPs are voluntarily leaving the camps and returning back to their villages.
This he said has enabled the Agency to start closing some of the camps. He therefore commended the Air Force for its role and thanked the Service for the support offered to the IDPs at the various camps. Alhaji Sidi further stated that by returning to their villages, the IDPs are sending a clear message to the terrorists that their actions would not deter them from building their communities. The DG-NEMA also used the occasion to praise the IDPs for their courage and emphasized that this was essential in building residency.
You are please requested to disseminate this information through your mass medium for the awareness of the general public. Thank you for your usual cooperation.
Air Commodore Dele Alonge
Director of Public Relations And Information