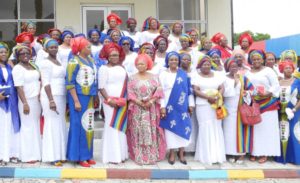 In another development, the Defence and Police Officers’ Wives Association (DEPOWA)  has built a Skills Acquisition Centre in support of the widows of fallen members of the Armed Forces. The Centre, which is set to commence operation in November 2015, will give free training and services to the widows and children of those that died in active service, especially those that lost their lives in the fight against terrorists.
The National President of DEPOWA, Mrs Omobolanle Olonisakin made this disclosure during a courtesy visit of the organisation to the Chief of Defence Staff (CDS), General Gabriel Olonisakin at the Defence Headquarters Abuja. She stated that the maiden visit of DEPOWA Executives to Defence Headquarters was to formally show their unflinching support to the CDS and members of the Armed Forces towards  their efforts in the fight against insurgency and other forms of criminalities in the country.
She maintained that as a humanitarian organization, the association will continue to embark on programmes that geared towards development and empowerment of women and children, especially members of the Armed Forces and the Police in our Barracks Communities.  According to her, ”we are committed to taking care of the home front while our husbands battle in the field”, she concluded.
In his response, the CDS expressed appreciation  for the visit and commended the DEPOWA  on their various programmes towards alleviating the plights of the widows and their children. He charged them not to relent in this noble endeavours which has gone a long way to assisting their husbands to remain focus in their various deployment.  He also charged them to be proactive in the promotion of core values in the barracks communities and to create  platforms for the spouses and children of military personnel to have basic entrepreneurial skill.  He therefore assured the organisation of unflinching support of the military leadership.
DEPOWA  is a Non Governmental Organization comprises of the wives of Officers’ of the three arms of the Armed Forces and the Police.
PRNigeria
PRNigeria encourages institutions to be transparent in their information management as it provides news items from authoritative sources for free use by the media