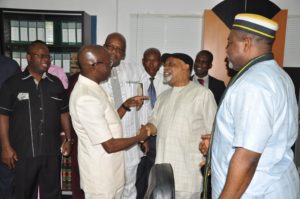 The Honourable Minister of Labour and Employment Sen. (Dr.) Chris Ngige has promised to reposition the Ministry of Labour and Employment for employment generation and effective workers’ protection through provision of Labour Market Information, vocational skills acquisition and other programme of the administration of President Muhammadu Buhari GCFR.
The Minister stated this today when he received the Executive governor of Edo State, His Excellency, Comrade Adams Oshiomhole on courtesy visit Continuing he said, “The Ministry of Labour and Employment has capable departments to promote good labour administration, promote decent jobs for unemployed Nigerians and provide occupational safety and health protection services.
We are determined to turn things around and ensure that the Ministry perform its primary role as the focal agency of government in charge of employment generation as well as ensure workers safety and health at work places”.
Speaking, the Honourable Minister of State, Mr. James Ocholi SAN, added that the present administration will leave no stone unturned in order to ensure that the scourge of unemployment is reduced to its barest minimum. He emphasized that the Ministry is well positioned to champion the fight against unemployment.
Earlier his remarks, the Executive Governor of Edo State, Comrade Adams Oshiomhole congratulated the Minister on his appointment describing it as a round peg in a round hole.
He stated that the purpose of the visit was to reflect on salient issues that are germane to the welfare of the citizens of the country. Speaking further the Governor affirmed that the administration of President Muhmmadu Buhari GCFR, has made it clear that the primary purpose of governance is the welfare of the people and the only way to deliver public welfare is to pay attention to job creation. He emphasized the critical role of the Ministry in employment generation, workers protection and maintenance of industrial peace and harmony in the country.
In his words “This ministry in the past years was noted for registration and placement of unemployed Nigerians in various job centres across the country thereby generating reliable data of unemployed youths as well as carry out regular trade test, do proper grading of skilled and semi-skilled and produce competent man-power through vocational training without necessarily attending higher institution.
I believe sir that this is one area that we have neglected over the years and giving the commitment of the present administration to job creation we need to re-establish those units in all the state of the federation possibly in every Local Government Area for people who are qualified and willing to work to register”.
Governor Adams bemoaned the influx of expatriate in all disguise into the country while urging the Minister to liaise with his counterpart in the Ministry of Interior to review the issuance of expatriate quotas
“As you go round the country you will find unskilled expatriate doing the job unskilled Nigerians can do, I believe that this is unacceptable. I want to urge you to liaise with your counterpart in the Internal Affairs Ministry to revisit the process of issuance of expatriate quotas”. The Governor stated.
Samuel Olowookere
Deputy Director (Press)