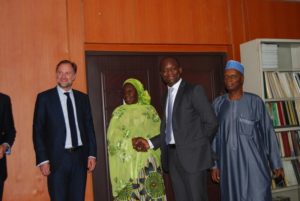 The Minister of State for Industry, Trade and Investment, Hajia Aisha Abubakar has assured investors that the current challenges confronting Nigeria would soon be a thing of the past as the current administration was doing everything possible to overcome them.  She said the change mantra is real as government focus is on 3 sectors that will make it a reality.  “We have a policy focus on three key issues and these are security, economy and anti corruption” she said.

The Minister said this while receiving a delegation of representatives of business institutions from around the world led by the Chief Executive of Susman & Associates, Dr. Shamsudeen Usman who is also a former Minister of Planning in Nigeria.  Hajia Aisha Abubakar stressed that the fall of oil price was an opportunity for the country to diversify its economy.  She averred that Nigeria is rich in solid minerals and agriculture and therefore urged the investors to look into those areas by using the raw materials to manufacture goods here in Nigeria as the government is committed to import reduction.

The investors were also assured of the security and profitability of doing business in Nigeria as it has comparative advantages compared to some other countries particularly in Africa.  These advantages, she said include large population, robust government policy on trade and investment as well as security as the country is not prone to natural disasters.

She disclosed that an inter ministerial committee has been set up by the President to ensure that issues and challenges are looked at, she further said that government is set to move  Nigeria trade ranking from the current 168 position to be among the first one hundred.

Speaking earlier the leader of the delegation Dr. Shamsudeen Usman, Chairman and CEO SUSMAN & ASSOCIATES said he worked closely with the CEO OF RENAISSANCE CAPITAL, Mr. Temi Popoola to bring in the foreign investors even though some of them already have businesses in Nigeria.  He described them as representatives of business institutions that manage hundreds of billions of dollars. He said their presence in Nigeria was in recognition of the it’s high importance in the committee of nations.

In his speech the CEO of REINAISSANCE CAPITAL, Mr. Temi Popoola  described Nigeria as a land of opportunity adding that collectively they had already invested about 2 billion dollars in the country.  He disclosed that the business executives who came from all around the world like America, Europe, Asia and Middle East were in the country to interact with policy makers and ask a few questions, and understand what the current business environment was.  He also revealed that the investors were involved in direct investment in real estate, infrastructure and manufacturing while some were portfolio investors.

The Permanent Secretary, Mr. Aminu Aliu Bisalla, SA’s to the Ministers and some Directors of the Ministry were also present.